Testing projections at The Word

On Friday I visited The Word to do some technical research in preparation towards my forthcoming exhibition in the Story World area of The Word.

Story World is a white space with four slightly curved walls and four projectors that project onto each of the four walls to create an immersive environment.

I had prepared a number of videos and still images with different aspect ratios and wanted to establish which format would be the best for the room, and whether I would need to create masks in order to avoid any of the projections bleeding onto the wall or floor. 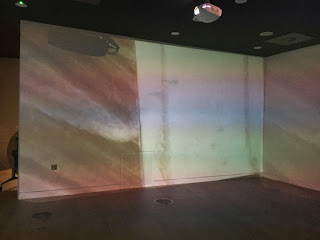 The image above was an animation made on clear 16mm film stock. The colours were not as vibrant as I had expected, possibly because the room is not totally dark. There was some bleed on the floor, and when the projection went to the ceiling, the projector shadow was visible. 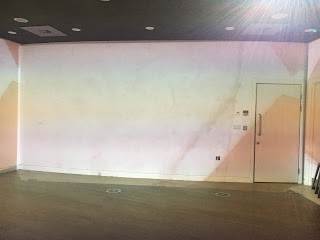 I also noticed that the edges of the shapes in the animation did not seem as crisp as they appear on the original film, but this will be because of the amount that the image has been enlarged by. 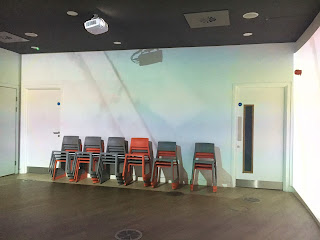 The image below shows a projection of an animation that I made using the black 16mm film strip. 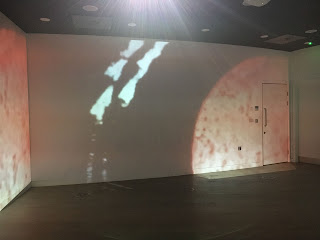 The image above shows a panoramic view of the 3 walls with the same projection on. 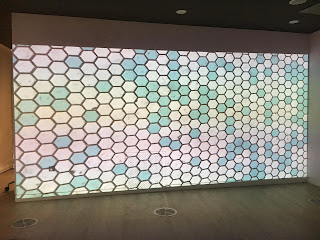 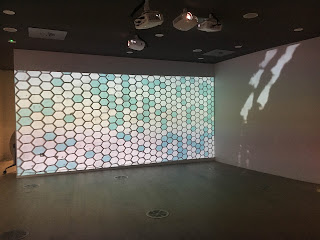 In these images, the projections with the hexagonal patterns have been applied with a template so that the top part of the wall is not projected on. This eliminates the shadow from the projector from being in sight. The other wall with the black film image still has the bleed on the floor, but the image goes all the way to the top of the wall. 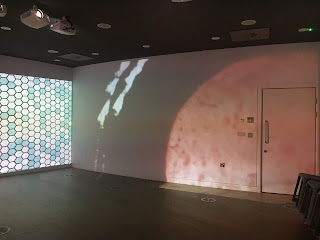 These show the projection with the template applied reducing bleed to the ceiling and floor. 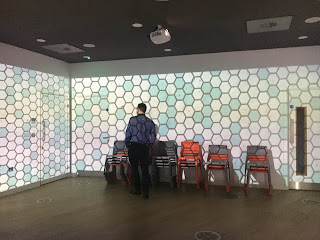 My mission now is to decide what I prefer and create an appropriate template for my footage prior to creating the video file to be projected. Wish me luck!

Posted by Helen Shaddock artist at 14:05