"Bringing together film, sculpture, performance and installation into multi-layered projects, the core themes of Jasmina Cibic’s practice explore how art, architecture and political rhetoric are deployed and instrumentalised in the name of the nation. 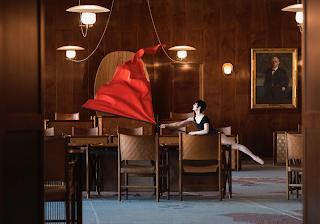 For BALTIC, Cibic has developed a site-specific installation that showcases the three films of her latest Nada trilogy presented for the first time in the UK. Setting and framing the scene, the artist has devised chambers where specific architectural components are reconfigured. These include design fragments drawn from modernist Yugoslavia’s unique synthesis of architecture, art and design, culminating in the modernist palace which housed the First Conference of the Non-Aligned Movement in 1961 in Belgrade. Corridors, curtains and murals here become theatrical devices which guide the viewer through the exhibition. 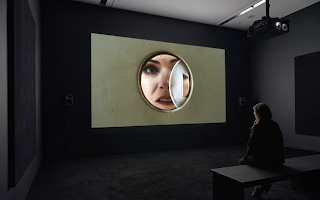 Bridging the installation is the narrative trio of films that examine three of european modernism’s star architects and the role their work played in forming national representation in decisive moments of European history. These include Mies van der Rohe and his trade fair designs for Germany in the 1920s; Vjenceslav Richter’s Yugoslav Pavilion for the 1958 Brussels EXPO and Arne Jacobsen’s Aarhus Town Hall finished during the Nazi occupation of Denmark. 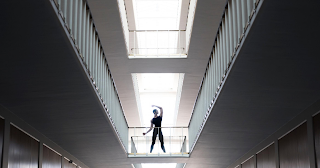 Nada, meaning hope in Croatian, gathers together these historical symbols and iconographies that stand between ideological censorship and cultural production. Cibic’s projects present a synthesis of gesture, stagecraft and re-enactment, revealing the strategies employed for the construction of national culture as well as their use on behalf of political goals. Realised in films and installations, hers is also an ongoing performative practice, an ‘enacted’ exercise in the dissection of statecraft." 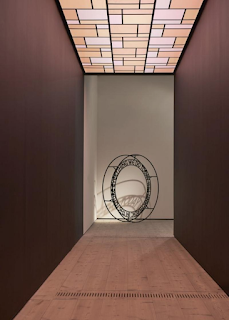 I found this installation to be visually stunning and intellectually stimulating. Although Cibic's work is layered with meaning and historic references, I feel it is possible to appreciate the work without being privy to this information. Cibic's ability to compose her videos is exquisite. Mirror images, symmetry and formalism, all come into play. The initial walk through the long illuminated passageway sets the scene for what is to come. The first room shows Vjenceslav Richter's original and censored design for the Yugoslav Pavilion in Brussels reinterpreted as a musical instrument. The second film Cibc's redirection of Bela Bartok's pantomime ballet The Miraculous Mandarin. The final film features a debate staged between 3 women about what art should be. It had lots to get me thinking!
Posted by Helen Shaddock artist at 18:54