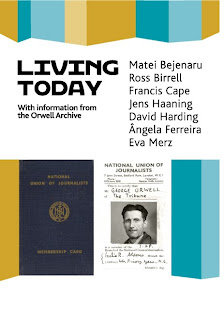 Living Today
With information from the George Orwell Archive

Last night I went to the preview of this exhibition and will be going back to have a closer look at the work. I particularly enjoyed the music played by the legendary DJ, Russ Winstanley.

This group exhibition presents artists whose work explores aspects of the society they live in – politics, culture, economy, living conditions and social structures.

Included are copies of information from the Orwell Archive, University College of London, relating to George Orwell’s 1937 publication “The Road To Wigan Pier” which, commissioned by Victor Gollancz and published by the Left Book Club, documented poverty in the north east of England before the Second World War.

Matei Bejenaru (Romania) makes work that analyses the way in which globalization affects post-communist countries’ labour forces. Past works include a Travelling Guide for Romanian illegal workers. The focus of Francis Cape’s (USA) artwork took a dramatic shift following a visit to New Orleans in 2005, just two months after Hurricane Katrina. After witnessing the destruction of lives, buildings, and an entire city's infrastructure, the artist turned to a combination of photography and construction, and began exploring themes of rescue and recovery efforts, social neglect, and design for living. Ângela Ferreira (Portugal), born in Mozambique and living between both South Africa and Portugal, explores ideological and economic issues between cultures. Jens Haaning (Denmark) looks at those living in society’s margins, in particular refugees.

As part of the exhibition we are publishing ‘You, Me, Them & Us’, by Eva Merz, a Danish artist living in Glasgow. This book contains series of interviews offering different perspectives, opinions and first-hand experiences of the Women’s Prison System in Scotland. Ross Birrell and David Harding make a trip to Wigan in response to this exhibition, to read from “The Road to Wigan Pier”.

*Opening Night performance
Fri 14 Jan, 7.30-8.00pm
On the opening night of exhibition ‘Living Today’, DJ Russ Winstanley, founder of the legendary Northern Soul venue the Wigan Casino which ran ‘allnighters’ from 1973-1981 plays. Winstanley will play the famous ‘3 Before 8’ (Tobi Legend ‘Time Will Pass You By’, Jimmie Radcliffe ‘Long After Tonight Is All Over’ and Dean Parrish ‘I’m On My Way’) which were played three times at the end of each allnighter. Winstanley will end the set with Frank Wilson’s ‘Do I Love You (Indeed I Do)’, the last song ever played at the Wigan Casino. Winstanley performs as part of Ross Birrell and David Harding’s work in the exhibition.
This performance is free and everyone is welcome!
Posted by Helen Shaddock artist at 17:09 No comments: 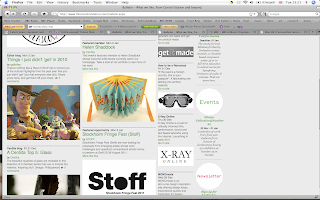 "This week's featured member is Helen Shaddock whose colourful artist books currently adorn our homepage. Take a look at her portfolio to see more of her work."
Posted by Helen Shaddock artist at 23:26 No comments:

I hope 2011 brings lots of happiness, good health and success.

It's back to work now, so keep your eyes peeled for blog posts.

Have a good one!

Helen
Posted by Helen Shaddock artist at 23:23 No comments: