Over the past couple of weeks I have been diverted away from my studio due to a number of factors. I am currently in the process of moving house (yet again), and the flat hunting, sorting, packing, cleaning, and unpacking process seems to have consumed much of my time.

In addition, I recently trapped a nerve in my back, and so my movement has been limited. Lifting things has been out of the question (not good when you are moving flat), and so I have had to take a break from casting.

These restraints have caused me to work in new ways and try different processes. I have been working on some new animations and experimenting with paints and collage. One has to adapt to different situations and conditions, and I am keener than ever to get back into the studio and begin making again.
Posted by Helen Shaddock artist at 00:59 No comments:

Email ThisBlogThis!Share to TwitterShare to FacebookShare to Pinterest
Labels: may 2012

David Kelley: How to build your creative confidence

Wonderful TED talk by David Kelley, founder of IDEO, in which he talks about instances when creative confidence has been squashed, and offers ways to build the confidence to create.

Email ThisBlogThis!Share to TwitterShare to FacebookShare to Pinterest
Labels: david kelley, how to build your creative confidence, TED talk

Beyond the Frame, Contemporary Cuban Art

The current exhibition on the top floor of the Lighthouse intends to raise awareness about the 'Miami Five'. There is a combination of work by Cuban artists and work by Britain-based artists, with an information  section detailing the reason behind the exhibition.

Below is a recent article from The Herald about the exhibition:

Some of Scotland's most respected artists have contributed to an exhibition which aims to attract international attention to the case of five Cubans held for years in the United States on what many believe to be trumped-up espionage and terrorism charges.

One of the works on show at Beyond The Frame

Scottish artists join exhibition to highlight ‘unjust’ jailing of Cubans. Exclusive by Andrew McLeod
John Byrne, Alasdair Gray, David Harding, John Keane, Sam Ainsley and Sandy Moffat have contributed work to the Beyond the Frame exhibition, which opens in Glasgow this week. Altogether, 20 artists based mainly in Britain have joined 26 Cuban artists and photographers in donating works to the cause.

"It's a very eclectic exhibition, with many different styles and media," says Jan Pietrasik, Glasgow coordinator for Beyond the Frame, which runs at The Lighthouse from May 7 to 13.
Twelve Nobel Prize winners have called for justice in the case, including Desmond Tutu, Nadine Gordimer and Jimmy Carter.

"Amnesty International and other human rights organisations see their trial as unfair," says Pietrasik, adding that sales of works would go towards the campaign to free the men.
The Miami Five – Antonio Guerrero, Gerardo Hernández, Ramón Labañino, Fernando González and René González – were arrested in 1998 on espionage and terrorism charges and jailed in 2001 with sentences ranging from 15 years to double life. Their defence has argued that the five were not spying on the United States but had infiltrated Cuban exile terrorist groups, such as Alpha 66 and Brothers to the Rescue, in Miami to prevent attacks being carried out against Cuba.

These included a wave of bomb attacks on Cuban hotels and nightclubs in the 1990s, which Cuba claims were masterminded by Luis Posada Carriles, an exile with a CIA background.
Four of the Miami Five are held in separate US prisons, with some families denied visiting rights. René González has been freed on parole in Miami, but remains in hiding for fear of an attack by Cuban exiles.

The Five's relatives claim there could never be a fair trial in Florida, which has a large Cuban exile population. In 2006 at least 10 Miami journalists opposed to the Cuban regime were revealed to have been in the pay of the CIA or federal government. The relatives are now seeking a new appeal.

Guerrero, who learned to paint behind bars, and Hernández are both exhibiting works.
"There has been a very encouraging response to the exhibition," said Lesbia Vent Dumois, an exhibiting artist and founding member of Cuba's National Art School. "There are over 50 works, by prominent Cuban artists but also by many artists of other nationalities, and by Cuban photographers, some of whom began their careers in the early days of the Revolución, while others are well-known contemporary photographers, such as René Peña."
María Eugenia (Maruchi) Guerrero and Mirta Rodríguez, sister and mother of Antonio Guerrero, told the Sunday Herald they were delighted and surprised by the response to Beyond the Frame. "This display of solidarity for my son has made me very happy," said Mirta Rodríguez.

Guerrero is in good health according to his sister Maruchi. "He looks after himself, not least because he knows his family need him."
"I do not have a problem obtaining a visa to visit my son, but it is cruel because I have only been able to see him once a year, and I am going to be 80," said Mirta Rodríguez, adding however that she believed she would soon be able to make two visits a year.
The Miami-born Guerrero was a year old when he and his parents returned to Havana in 1959 following the overthrow of Cuban dictator Fulgencio Batista. "Tony became a civil engineer," says Mirta Rodríguez, "and was involved in the expansion of the airport in Santiago de Cuba. He has always been interested in drawing. In Colorado he met a cellmate who was an artist and taught him to paint. It has been a good way of filling his time, doing something he loves."

Guerrero, in an occasional blog run on the Cuban website Cubadebate, says that apart from painting, in which he is "totally absorbed", he is teaching other prisoners, mostly Mexicans and Puerto Ricans, to read and write. "Sometimes, when I am wandering about, in the dining room or in the recreation room, a pupil or someone who doesn't remember my name will call me teacher. Some just call me Cuba. When I can't remember someone's name, I always call them friend."

A PAINTING by Guerrero of a guitar-playing figure riding a blue unicorn, which is on display at the exhibition, is reminiscent of Picasso's Guernica. In fact it is a tribute to Cuban Nueva Trova singer Silvio Rodríguez, whose song Unicornio became famous across Latin America after the 1980s collapse of right-wing military regimes in Chile, Argentina, Brazil and Central America.

"My son has been working on a project with Silvio, who sends him photographs from his concerts in Cuba, and Tony makes portraits or paintings from them," said Mirta.
Said Maruchi of the exhibition: "We need to move forward with a new appeal, even though it will be in the same court, before the same judge, who will not admit mistakes. But international pressure can make a difference: in art, there are no prison bars."

The other exhibiting member of the Miami Five, Gerardo Hernández, is a cartoonist whose selection depicts what he sees as the international media's portrayal of Cuba. "Someone once said that humour liberates – if nobody said that, I will," says Hernández in a note on his work. "For me it is something that gets us out, for at least a few moments, from behind the walls where we have been unjustly imprisoned for almost 13 years."

Other artists exhibiting include René Peña whose photographic self-portraits, explore themes such as black identity and sexuality; Gustavo Díaz Sosa, who will be at Beyond the Frame in person, and whose work features diminutive human figures trapped in claustrophobic landscapes; Eduardo Roca Salazar, known as Choco, who focuses on portraits of farmers and Afro-Cuban women; and José Fuster, whose In the Palm, includes several human figures which he says "maybe have been saved from the terrorist action that Cuban people have suffered."

the lighthouse glasgow May 7-13
Posted by Helen Shaddock artist at 23:06 No comments:

Email ThisBlogThis!Share to TwitterShare to FacebookShare to Pinterest
Labels: beyond the frame, cuba, exhibition, newspaper article, review, the Herald, the lighthouse, the miami five

GIAB 2012 participant, Susan Mortimer, blogs about her trip to Glasgow and involvement in GIAB. 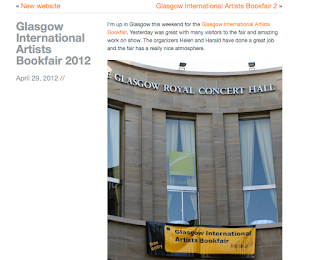 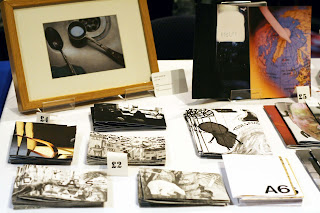 Posted by Helen Shaddock artist at 00:56 No comments:

Today I went on one of the Gi SPIN - Off tours organised by Glasgow International.

What a great idea. Led by the wonderful Lesley Hepburn, the group of approximately 30 people were driven from gallery to gallery by bus. Lesley provided en-route commentary about the festival and the galleries we were visiting, and once at each destination, the curators/artist/gallery staff introduced the exhibition to us, giving some information about the artist/the work/the gallery space/the curatorial premise.

There was a real mix of people on the tour, making for some interesting discussions. The tour was a great opportunity for artists to meet with non-artists, Gi regulars to chat to Gi newcomers, and for locals to mix with visitors to the city.

The tour was well organised, with appropriate time allocated at each exhibition, and snacks and refreshments were even provided! I would well recommend doing a Gi Spin-off tour, and hope they will be running again at Gi 2014.

Our intinery was as follows:

Email ThisBlogThis!Share to TwitterShare to FacebookShare to Pinterest
Labels: 2012, exhibitions, Gi, may 2012, spin off tour

Tonight I was lucky enough to be working for the Scottish premiere of Op.17a by the visual artist and composer Hanne Darboven in the Recital Room at City Halls.

The double bass was positioned in the centre of the room with seats in a square around the performer. There were a few groups of candles on mirrored tiles on the floor. Robert Black introduced the piece, acknowledging that the performance was programmed for the recital room because the outside light levels can be witnessed. He noted that over the duration of the piece the light will dim as dusk draws in.

I cannot describe how wonderful the performance was, but here are some words that fill my mind when thinking about what I just witnessed. 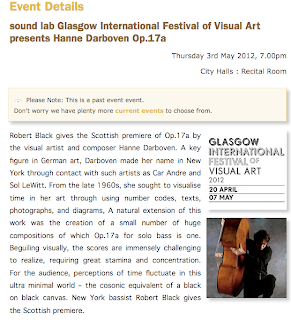 Posted by Helen Shaddock artist at 23:42 No comments:

Isa and Caro (aka Under_Cover) blog about their participation in GIAB 2012.

Read what they have to say here 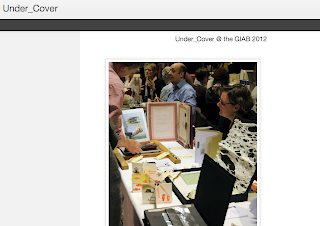 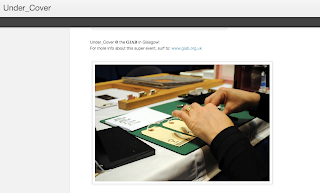 Posted by Helen Shaddock artist at 01:06 No comments: