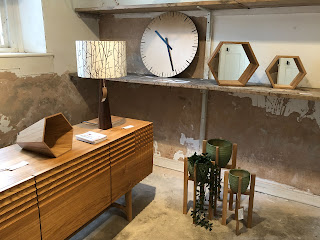 Whilst working at Cheeseburn last weekend I got to meet Nick James who was showing his work in the pop-up shop (he will be this weekend too). I really admire his ethos and way of working. The products he makes are outstanding.

"He’s an advocate of traditional woodworking techniques that are rare in contemporary practice. Every piece is made by Nick and his team of skilled craftsmen in his workshop at Mushroom Works in Newcastle upon Tyne in the UK. Along with his team of expert makers, he uses the best time-tested methods of connecting pieces of wood by unbreakable joints and precise construction methods to create furniture that will last lifetimes." 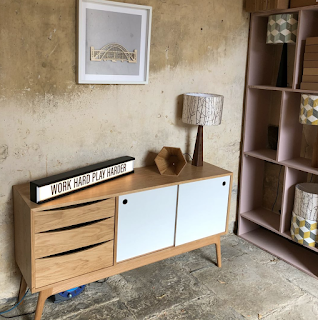 I was pleased to see so many people buying work from him. Although his main passion is for developing new products and making the bespoke items of furniture, Nick also makes a range of small more affordable products such as wooden lamps and shades, chopping boards and clocks, some of which can be personalised and are available to purchase online. 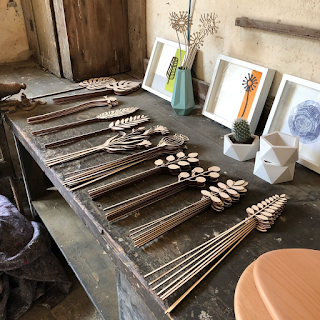 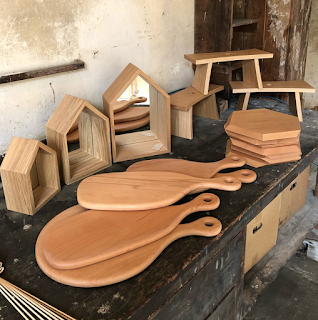 Nick spoke to me about how he has adapted his product range in order to cater for the online shopping market, but he is always happy to work with clients who would like to commission him to make products that meet their specific requirements. 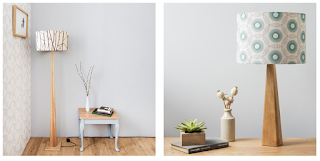 I'm hoping that at some point in the future I will be able to be the proud owner of a Nick James product!

https://www.jamesdesign.co.uk/
Posted by Helen Shaddock artist at 16:58 No comments:

Plato's Lair by Peter Hanmer is one of the delights currently being exhibited at Cheeseburn, Northumberland. Peter won the Gillian Dickinson North East Young Sculptor of The Year award 2017 with his proposal for Plato's Lair. Housed in the potting shed in the beautiful grounds of Cheeseburn Grange House and Gardens. The work is heavily influenced by Plato’s story The Allegory of the Cave featured in Plato’s seminal work The Republic. 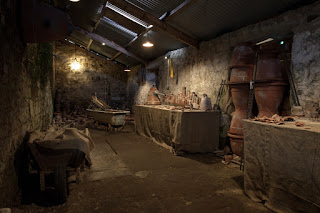 "Plato asks us to imagine prisoners inside a cave, their legs and necks shackled. They can only look at the wall in front of them where projected images are made by puppets and the objects behind them; they can't see these because they cannot turn around, the shadows on the wall are the prisoners only reality. 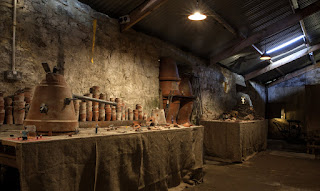 A prisoner who manages to escape from his chains discovers that it is the puppets and fire that are casting the shadows and that their reality is an illusion. Once out of the cave the prisoners eyes adjust to the sunlight and see reality for what it really is, including plants, animals, the sky and most importantly the sun, which for Plato represents enlightenment. The now free prisoner returns to the Cave to tell his fellow prisoners what he has sees." 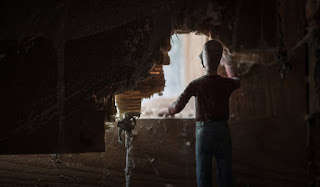 There are similarities when viewing the work at Cheeseburn. One passes through the fabric barrier into a dark space. Steps down lead to the grotto-like cavern populated with 30-40 little figures. As your eyes slowly begin to adapt to the lighting conditions, more details are revealed; non-human characters with beaks are engaged in a multitude of activities. 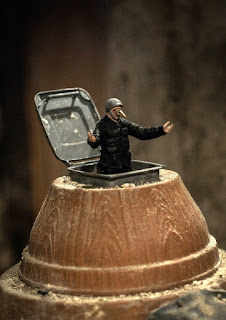 Peter has incorporated some of the objects found within the shed into the narrative that he constructs. For example, an ancient lawnmower is used to project images onto a screen. 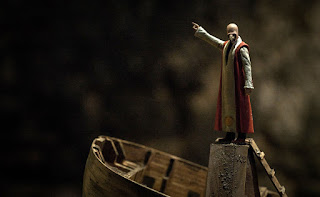 The figures belong in the potting shed, it is their world, and we are invited into it.

The installation is open to the public at the August Bank holiday weekend (25th, 26th, 27th August) and the first weekend in September (1st and 2nd September). Opening times are 11am-4pm. For more information visit

All images courtesy of Paul Stephenson
Posted by Helen Shaddock artist at 20:09 No comments:


This Bank Holiday weekend I will be working at Cheeseburn for their open weekend. 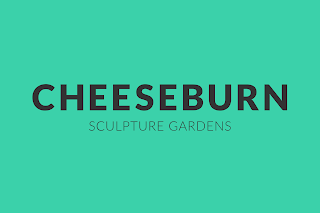 Here is a quick overview of what is to be seen in addition to the many permanent sculptures that are situated within the grounds of Cheeseburn Grange.

Posted by Helen Shaddock artist at 18:24 No comments:

"Blackburne House, located in Liverpool’s vibrant Georgian Quarter, was the home of the first girl’s school in the country. The beautiful Grade II listed building is now a home for women’s education with services including a health spa, nursery and bistro. Blackburne house also hosts conferences and events, ensuring a space in the city for events that champion the voices of local women. 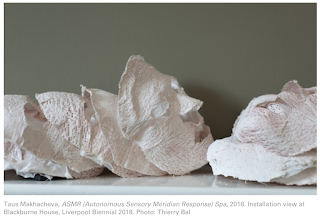 Taus Makhacheva has created a ruin-like sculptural installation that serves as a spa, in collaboration with artist Alexander Kutovoi. The installation incorporates ASMR (Autonomous Sensory Meridian Response) techniques and video. A new range of beauty products has been developed with Tigran Geletsyan from 22|11 Cosmetics for spa treatments. Throughout the Biennial, visitors are invited to book a facial treatment, which will be conducted by a performer and take approximately 30 minutes. In this passive state, the visitor becomes a sculptural subject. During the treatment, stories about artworks that have disappeared throughout the history of art will be told. The work reflects on our contemporary condition, dominated by screens and membranes, anxiety and loss of intimacy."

Visitors are able to be in the space to watch the facial treatments taking place. I arrived shortly after someone had left, so saw the performer clearing up. There were a couple of sculptures that contained a video screen. The audio was that which is spoken by the performer as they give the facial treatment, and so even though there was no treatment taking place during my visit, I was still able to be guided through the stories.

It was only afterwards, when I was talking to the performer, that I realised that this was the case. I had not been aware that the voice on the video was from the performer's perspective. I had also presumed that the person giving the treatment was a trained professional, and my thoughts about the work altered when I found out that performers were being used (there were 2 performers that shared the workload throughout the festival). I felt uneasy about someone 'pretending' to be a therapist.
Posted by Helen Shaddock artist at 14:48 No comments:

Drone Ensemble would like to thank all the amazing invited performers and the wonderful audience who joined us for our performance in The Boiler House at Newcastle University last night. 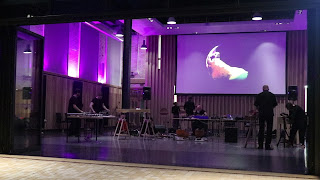 We really enjoyed the evening, and hope that you did too. 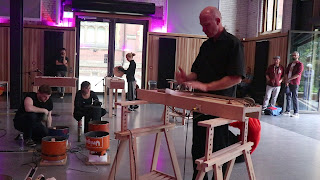 Playing with the invited guests was a honour and they added to the Drone Ensemble soundscape. 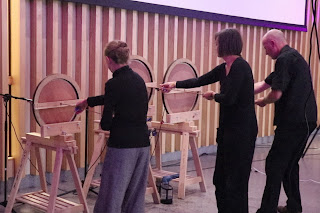 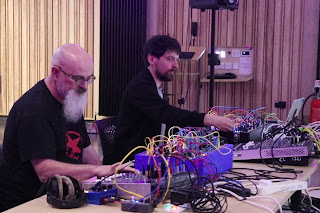 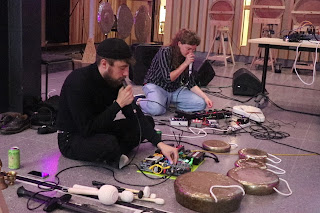 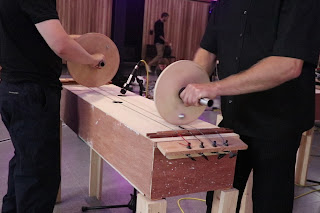 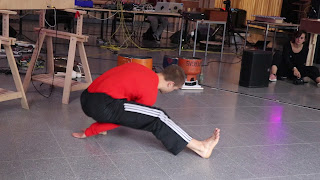 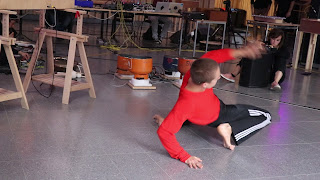 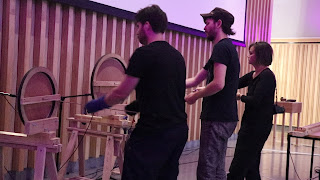 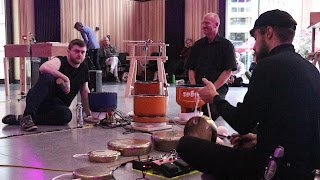 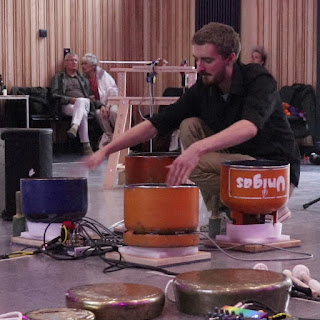 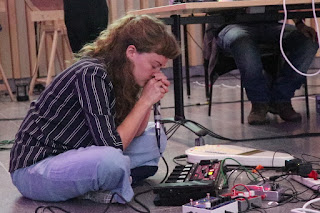 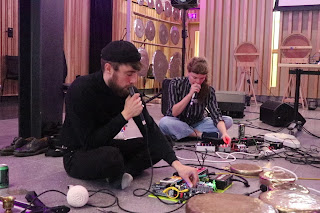 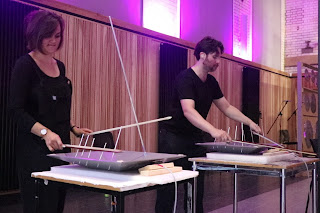 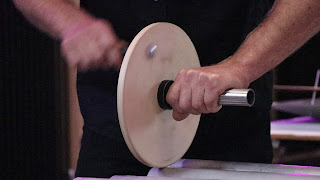 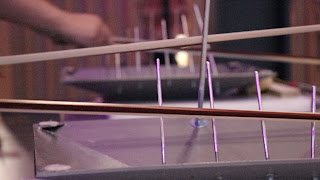 Posted by Helen Shaddock artist at 15:52 No comments: 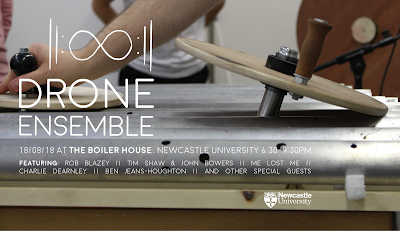 
Drone Ensemble is an experimental sound group that uses hand-built acoustic/electric instruments in extended improvised performances. The instruments draw influence from musical traditions from around the world but are unique in their playability, construction and sound. Drone Ensemble has a fluid membership and promotes a belief that exciting and cutting-edge sound art is not an exclusive activity but rather is better enjoyed through a sense of community.
For this 3-hour performance, Drone Ensemble will bring forth complex frequencies that excite the Boiler House air; weaving between slow, meditative sonority and thunderous rhythmic patterns.
At various times throughout the performance, Drone Ensemble will be joined by special guests who include- Rob Blazey, John Bowers/Tim Shaw, Me Lost Me, Ben Jeans-Houghton and Charlie Dearnley.
Audiences who wish to be lost in a realm of drone are invited to attend for the entire performance, others are invited to drop in and out throughout the duration. Spirits will be lifted up into the eternal frequency and the universe will never be the same again. 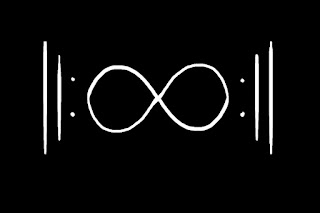 https://mailchi.mp/0c2aee6e1a7c/drone-ensemble-performance-the-boiler-house-saturday-18th-august-630pm-930pm
Posted by Helen Shaddock artist at 13:10 No comments: