I regard it as a real treat to receive a personal letter, note, postcard or parcel from a friend. Items of post such as these make a welcome change from the usual bank statement, bill or piece of junk mail.

I have received a package from Tracy Mackenna and Edwin Janssen, the collaborative duo of artists who gave a talk the other week as part of the Newcastle University visiting artist lecture series, and with whom I had a wonderful tutorial with. 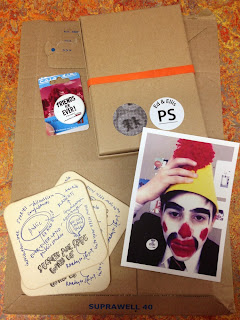 In the tutorial I was discussing the Out of Kansas exhibition at the Lit & Phil, and that Jodie and I were going to host a discussion event. I explained that we wanted to engage Lit & Phil regulars and those who visited the exhibition, and talk about issues around the work such as site responsive art, the changing role of libraries, and gather some opinions.

I then mentioned that Jodie and I are considering producing some form of material that could prolong the life of the artwork, and act as a document of what happened.

They then told me about one of their own pieces of work in which they had produced a set of beer mats that captured some of the conversations that happened in the pub. 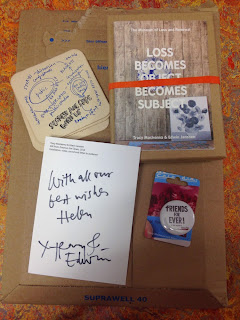 I was delighted to find that in the brown A4 envelope there were a few beer mats as well as a postcard, a friends forever badge and a publication. Huge thanks to Edwin and Tracy for sending me such a thoughtful piece of post. Much appreciated!
Posted by Helen Shaddock artist at 03:24