From studio to Lit and Phil

After a few final touch ups, the sculptural forms were ready to be wrapped and transported to their new home: the Lit and Phil. 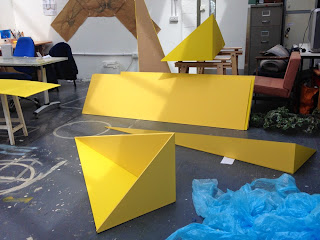 For the past week, the studio has been inundated with triangular MDF forms. The other MFA students  with whom we share the studio have been extremely accommodating of our need for rather a lot of space as we worked on the sculptures - thanks folks!

One by one we wrapped the triangles and then negotiated our way with them from the 4th floor to the ground floor through many a set of double doors! 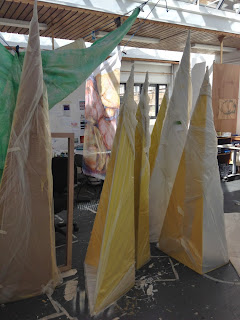 Our initial plans to move the sculptures in Jodie's car now seems like a joke given the size and number of items we had to move.

We hired Robert, a man with a van to transport the work to the Lit and Phil in one easy trip. The van could not have been more fitting for the sculptures - it was as though he had chosen the colour to complement our artwork! 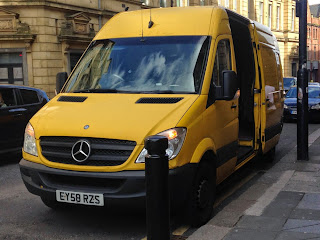 On the journey to the Lit and Phil I asked Robert what was the most unusual item he had moved. He then began telling me of the item of furniture that had been adapted on one side and turned into a snow scene with lots of miniature people and models. From the outside the item of furniture looked inconspicuous, but when the doors were opened, a miniature snow scene was revealed.

It turned out that he was a regular art handler, and it is not unusual for him to transport paintings by Damien Hirst around the country. At one time, he had over £3 million in the back of his van! 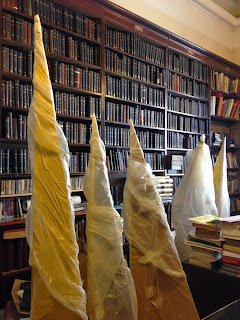 Once we had unloaded the items from the van, we put them in the Librarians office for unwrapping, and peeled off the film protecting the reflective surfaces from getting chipped or damaged. 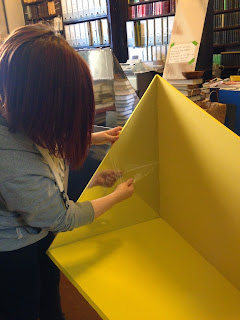 We then began placing the forms on the tops of the bookcases. There are a number of different styles and sizes of bookcases in the main library and we had made specific forms for specific bookcases. We followed our plan of the positioning of the shapes, but made a few adjustments once they were installed. 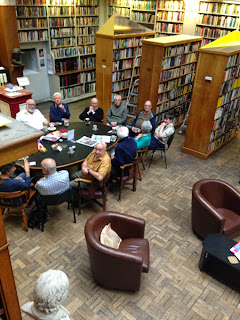 The bookbinding group meet on Monday evenings and take a break around 8pm for a cuppa and biscuit. As they sat at the round table, with interest they watched us climb up the ladders and install the work. Their engagement was very encouraging, and they responded positively to the work.

Posted by Helen Shaddock artist at 01:25