The World is Never Quiet

Last night I visited Durham Town Hall to watch a rehearsed reading of The World is Never Quiet, a new play by David Napthine.

David was writer in residence for the world’s first major exhibition on voice-hearing – Hearing Voices: suffering, inspiration and the everyday – that took place at Durham University’s Palace Green Library from November 2016 to February 2017. David has used this experience to construct a play about Durham and its voice-hearers.

The event was held in a very grand room within Durham Town Hall. The layout of the room was cabaret style seating. 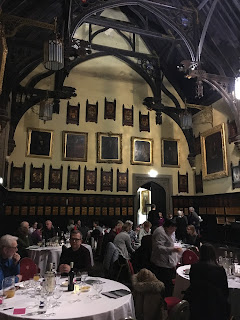 After a brief introduction to the event, 9 actors took to the stage in an arched line facing the audience. 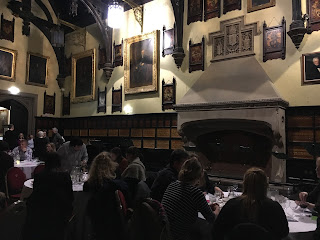 The narrative featured a range of individuals all of whom experienced hearing voices in some form. For example, one character, Carol, was caught in the middle of a nagging motherly voice and the voice of her better self. Another character experienced spiritual and religious voices. The narrative skipped from one actor to another, giving the impression that these voices were scattered around the city. 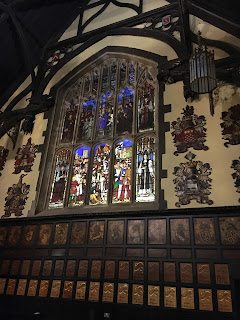 Given that this is a work in progress, the audience were encouraged to provide some feedback:

The grand setting of the Town Hall had an impact on my reading of the performance. I could not help but feel a distance between the actors and the audience. The formality of the hall placed me in an unfamiliar situation somewhat disconnected to contemporary society. The sense of grandeur that was created by the venue, did not seem appropriate for the play. My feeling of slight unease at being in such a venue made it more challenging for me to connect with the action. There was a sense of hierarchy and the actors were presenting to the audience as opposed to being integrated within the audience.

This was particularly true of one of the actors who exaggerated their lines in a way that was quite patronising and as though they were narrating and talking to a child. They were giving an account of hearing voices as opposed to some of the others who seemed to be sharing their experience of living with voices. This second approach was much more genuine and engaging.

I appreciated hearing the range of different types of voices that the characters experienced. I saw this as an effort to avoid conforming to the stigma that associates hearing voices with mental illness, psychosis and schizophrenia. I believe this is a real strength of the play and is commendable.

Overall, I found the narrative enjoyable, and think that with some simple adjustments to the staging and delivery of the lines, that the play could be really good.