The Talbot Rice Gallery is currently exhibiting two video installations by John Akomfrah, namely ‘At the Graveside of Tarkovsky’ (2012) and ‘Vertigo Sea’ (2015). Both installations "elegise the sea and use it as a metaphor for those lost to both recent and historic memory."

The Georgian Gallery has been filled with pebbles reminiscent of being at the coast. Audience members have to walk over the pebbles in order to be able to view the work well. Having felt the smooth pebbles on the balls of my feet, and heard the sound of pebbles knocking together as people walk through the exhibition, I felt like I had been transported to the scene. I felt much more immersed ‘At The Graveside’ as a consequence. 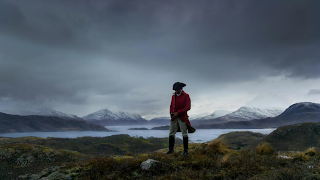 "Created with long-time collaborator Trevor Mathison, the work builds upon extracts from various Andrei Tarkovsky films to create a tapestry of sound memories from the islands of Skye (in the Hebrides) and Maui (in Hawaii). A meditation on disappearance, memory and death, the work is at once a personal lament – Akomfrah suffering loss at this time of his first visits to the islands – and an ode to the great Russian director who inspired Akomfrah as a young filmmaker."

‘Vertigo Sea’ (2015) is a three-screen installation that highlights the beauty and danger of the sea. 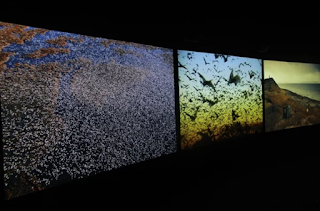 "Weaving together narratives of slavery, whaling and the current refugee crisis it is comprised of new footage, archival footage – with breath-taking selections from the BBC Natural History Unit – and literary sources, including Heathcote Williams’ ‘Whale Nation’ (1988) and Herman Melville’s ‘Moby Dick’ (1851). Initially prompted by a radio interview with a group of young Nigerian migrants, who had survived an illegal crossing of the Mediterranean, it expresses the feeling of what it is like to be at the mercy of something vast. Overwhelming, ever changing, and with unfathomable depths, the film represents both the physical and intellectual sense of ‘vertigo’ embodied by the sea."

This is spectacular. Unfortunately I didn't have enough time to watch the footage in its entirity (it's around 50 minutes long), but it is definately something I would like to go back and see. The footage is stunning, both beautiful and haunting. The three screens are edited to correspond with each other at times, the outer two may mirror each other but on the other hand, they may operate seemingly separately, focusing on different scenes. The pace of the different types of footage on the screens is well balanced. There is footage of the whaling process which viewers could find very distressing. Despite being pretty squeemish, I was able to continue to look as it was as though the whale meat was being treated as a sculptural material, and I almost forgot that I was looking at flesh. 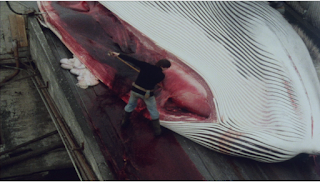 Posted by Helen Shaddock artist at 18:44