On Monday, at the first of what is intended to be a regular series of sessions at The NewBridge Project, Daniel Russell selected Against Everything by Mark Greif as the text to be shared and discussed.

"Against Everything is a thought-provoking study and essential guide to the vicissitudes of everyday life under twenty-first-century capitalism. He challenges us to rethink the ordinary world and take life seriously." 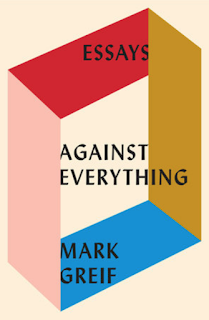 Dan chose to focus on the first essay within the book, Against Exercise because he had noticed a similarity between the behaviour and mentality applied when going to a present-day gym and that of production line employees in the industrial society. Has our change of working conditions i.e. less manual labour, had an impact on the way we want to exercise? Are we nostalgic about factory work?

We employ a personal trainer to punish us in order to liberate ourselves.

We criticise those who don't partake in the gym culture

The need to go to the gym is another example of the desire to be productive, doing something worthwhile with our time and even manage to do two things at once at the gym, workout while catching up on the latest television, listening to music etc.

The gym is a public space where private activities are carried out. Acts that previously would be regarded as private actions are now done in front of others, we puff, pant and grunt as we put our bodies through hard labour.

And the reason for these efforts? Greif argues that our actions are intended to prolong our lives, yet argues that in doing so, we are forgetting how to live.

I do not necessarily agree with this argument. He fails to consider the enjoyment that many people yield from participating in exercise and the social aspect of going to the gym.

Posted by Helen Shaddock artist at 12:24