Janice Parker : It's What I Do, Tramway, Glasgow

I was invited to 'It's What I Do', a talk with Janice Parker, an award winning independent choreographer and dance-maker.


It was billed as:

'An examination of practice

An investigation, a mapping

A particular process of dance making


Janice Parker talks to Jo Verrent in lively conversation – questioning, reflecting, interacting, illustrating and laughing. Now what could be better than that?'


I had never seen any of her performances live, and knew little about her, but with a little research it was clear that she is an incredible performer who gives a great deal to what she does and to the people she works with. 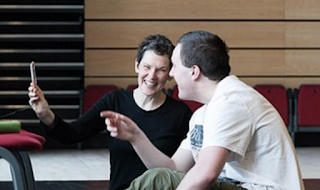 'She creates performance, devises and facilitates performance based projects, is active in dance development, regularly teaches and collaborates with people of all ages and abilities, mentors professional dance artists and organisations, occasionally writes about dance, and performs.

Her work is responsive to context, situation, place and, most importantly, the person.

She works with people of all ages and abilities often mixing the community and the professional dance worlds. Much of her current work is in collaboration with disabled performers. She is committed to bringing the work of disabled artists to more prominence and has created a rich body of collaborative work. Her choreography might easily involve a hundred or more performers in large scale works, or be an intimate solo portraits focusing on the voice of a single performer. 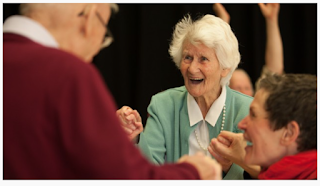 She creates live performance, movement for theatre, dance for camera, cross media installation, lectures and text. Her art-work is fundamentally an intervention. She is an artist interested in context and placement and in the outcomes of collaborative and socially engaged practice.'


Expecting to walk into a room with a group of chairs facing a couple of chairs, positioned ready for an artist talk, I was surprised by the reality. I was greeted by Parker, who pointed out the coat stands and encouraged me to 'talk to my neighbour'. Looking around the room, it became clear that most people knew each other, and knew Janice, and it became like a social gathering of friends. A chronological archive of Janice Parker's projects and work was presented on number of tables lined along the back wall. Parker then announced that we had 15 minutes to explore the archive. Items included scripts, newspaper cuttings, promotional material for the works, and letters of thanks to Janice from people who had participated in one of her workshops.


Once the 15 minutes had elapsed, we were instructed to gather around Janice and Jo Verrent for a 20 minute discussion about Parker's work. As I knew very little about Parker's work, I was disappointed that the projects/works were not described or explained, and so it was difficult to follow what was being talked about. I was pleased that some short video clips of different performances were shown, giving a sense of the movement that is central to her work. The still images that had been shown before did not do this.


When the alarm sounded after 20 minutes, Parker explained that the final part to the evening was an opportunity for us to write down our thoughts on her work, and what it was to be part of it. I felt cheated; I had paid for a ticket to get an incite into the work of Janice Parker, but was treated as though I already knew about the work. I think it was a case of misrepresenting or mis-advertising the event. It should have been described as some kind of participatory group discussion about Parker's work for those who have either participated in her workshops and projects, or those who have encountered her work before. In this case, it would seem a little unfair to have to pay to be part of the feedback group.

Although I was disappointed by the event itself, it is quite clear that Janice Parker is an incredible woman who does some amazing projects that have a real impact on the people involved and the audience.

Posted by Helen Shaddock artist at 02:33

Email ThisBlogThis!Share to TwitterShare to FacebookShare to Pinterest
Labels: 2015, artist talk, collaboration, dance, event, Glasgow, It's What I Do, Janice Parker, may, May 2015, performance, socially engaged practice, theatre, tramway