I'm pleased with how the casts are turning out, and am liking the colour combinations and the mixture of hard lines separating the different layers and blurrings of the boundaries. It is always exciting when removing the casts from the moulds as I do not know what to expect. When I am working on numerous casts at the same time it is hard to keep a track of which colours I have added to each mould, and so it really is a surprise when the casts are revealed.

I am conscious that the casts are rather delicate and, when positioned next to each other, they easily mark and pick up bits of plaster from the other cast. The nature of the installation means that I will be testing out placing different casts next to each other and moving them around. In order to make the casts more durable and reduce the chances of them marking when butted next to each other, I am going to coat each cast in a diluted polymer solution. This will seal the surface of the cast, making it less crumbly. It also helps the colours retain their vibrancy and tone, preventing them from becoming 'chalky' and pale. The polymer gives the surface a slight sheen, but as I will be using a diluted polymer mix, it shouln't be too obvious.

I will mix the polymer dilution in a bucket and then dip each cast into the solution. I will then submerge the other end of the cast in the polymer, ensuring that the whole cast has been coated in polymer. By dipping the casts into the polymer, I do not add any brush marks or texture on the surface. 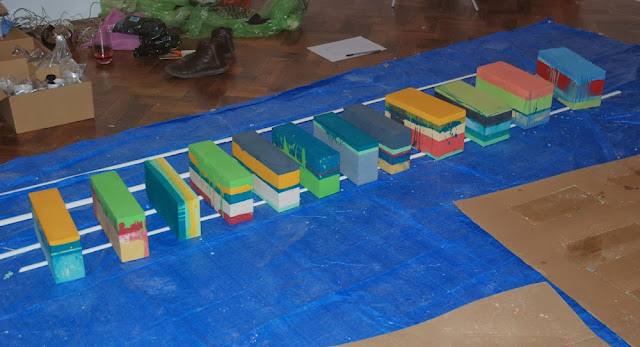 I set up my production line with buckets of polymer and tracklines to rest the casts on once polymered, and one by one, covered each cast. 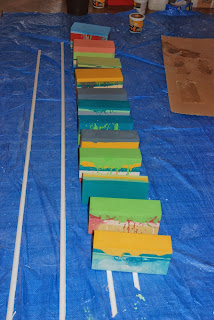 Posted by Helen Shaddock artist at 14:05