Sally Madge - How Can I Tell What I Think Till I See What I Say - Customs House, South Shields

It was a week ago that I was stood in the Main Gallery at Customs House listening to Nick Kennedy talk about his latest work. 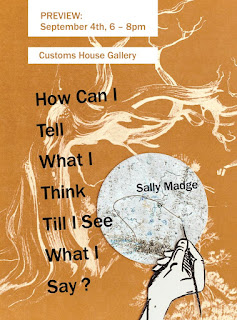 It is hard to imagine that the current exhibition, How Can I Tell What I Think Till I See What I Say by Sally Madge was assembled in less than a week. Included in the exhibition was a process-driven wall drawing in which the artist covered the entire wall in charcoal, turning the wall from white to black. This was then washed with cleaning fluid so as to turn the wall an inconsistent light grey. During the installation of the other artworks in the gallery, Sally realised that the wall drawing was too dominant, and therefore decided to use white emulsion paint to cover part of wall. 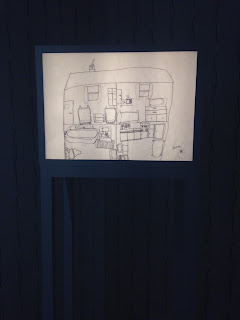 The title for this exhibition is taken from Aspects of the NovelOn Not Being Able To Paint
Taking her inspiration from a child's drawing of a house, her aim is to weave a series of visual narratives through the space about 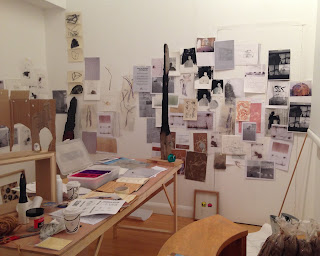 This exhibition is part of:
drawing?
Exploring the Creative process in Art, Culture and the Everyday

Email ThisBlogThis!Share to TwitterShare to FacebookShare to Pinterest
Labels: 2015, art, Customs House, drawing, exhibition, How Can I Tell What I Think Till I See What I Say, installation, Sally Madge, september, September 2015, South Shields, wall drawing