Don't be a Party Pooper and Grabber 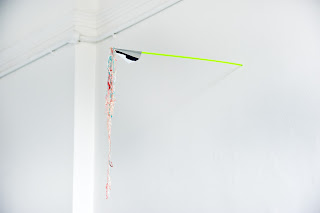 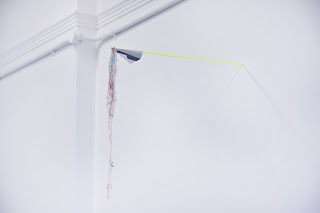 This work was created having made Grabber (see below). I felt as though I needed an artwork high up near the ceiling, and one with similar subtle qualities as to those of Grabber. The party poppers ribbons are a similar colour and tone to the jelly, the silver card is akin to the mesh. The acrylic rod has the same vibrancy, albeit of a different colour.

At times the acrylic rod can be fairly discreet, and the work could be missed (were it not for the floor plan), but in other lights, the rod glows brightly and attracts the viewers attention up the wall.

When positioning this work, I was also considering its relation to Strut Your Stuff which stands on the ground, and suggests an upward force whereas the party popper ribbons hanging down are governed by a downwards force. I positioned the two so that they do not touch each other, but could be said to be reaching upwards and downwards respectively. 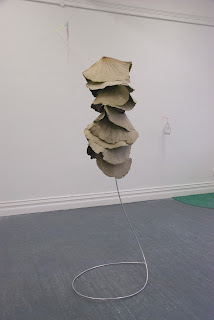 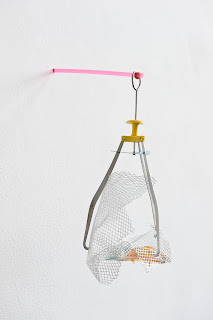 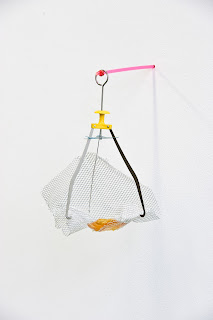 Grabber is the work that marks a shift in the way that I started to create artworks. I had been experimenting with jelly, and had lots of different colours, shapes and sizes in the fridge, but had not known what I wanted to do with them.

One day, when I was in the Chinese supermarket, I came across a plate grabber, and was immediately fascinated by it, and I must admit, was rather perplexed (and still am), by its function. I was trying to work out how to pick something up using the grabber, when I came across the wire mesh. It then became clear to me that I was to insert the jelly. 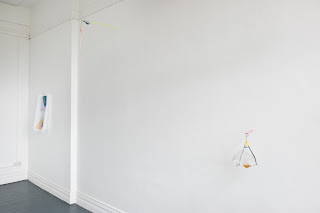 Posted by Helen Shaddock artist at 04:39