"The Belfast writer, who suffers from hallucinations and twitching, is defiantly upbeat about his condition. He has turned his experiences into a new pamphlet which is being used as a teaching resource for student nurses learning about the degenerative disease. 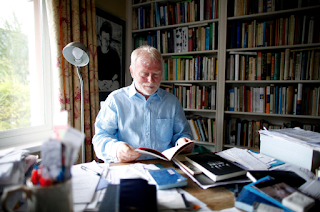 The poet Frank Ormsby lives with hallucinations and with the prospect of the earth opening up and swallowing him. That is how he describes Parkinson's Disease in a pamphlet of new poems to be launched tomorrow night in Belfast at the famous No Alibis bookshop on Botanic Avenue.

One poem includes the lines: 'Who is that girl I sense at my shoulder? Who is that dancing lazily/on my table until I look up?'

He is surrounded by ghosts. They are no bother to him. He remarks on their lack of energy in one of the poems Hallucinations 3: 'They have the fearsome patience of invalids. Whatever it is they are waiting for, they will wait forever.'

Frank was hospitalised seven years ago with heart failure and diagnosed with diabetes. So he has two afflictions to deal with.

His response to Parkinson's in his poems is a mix of humour and horror. He says: "It is hard to beat humour as an instrument against disease or unhappiness. I suppose as a writer I have always had a strong sense of the absurd."

You might think he would be deeply pained at having to live with hallucinations. In fact, he seems more bemused than bothered. He writes about taking these ghosts for a walk every day round the Waterworks on the Antrim Road, near where he lives. He wonders if the dogs there will sense their auras.

He says: "I think that people just naturally have a certain disposition or temperament and I seem to have the kind of temperament that sets considerable store by jokes and what you call whimsy. I am very glad to have this approach to life. It certainly helps to make negative experience a lot more bearable."

But the story is a sad and shocking one.

"From time to time I would think of the limitations of having this temperament. In these poems there is a certain amount of humour but you could go through them and pull together an awareness of the darker side."

But Frank says he is looking forward to the day Billy Connolly makes his Parkinson's the subject of a stage act. "I think there was always a part of me that wanted to be a stand-up comic."

But is there not a danger that others who have Parkinson's might not appreciate this humour, might find it insensitive to their own experience?

He admits: "I've got certain niggling doubts about that. I could imagine somebody who had Parkinson's say for 10 years or 20 years more than I have had it might listen sceptically to poems like these and say he knows nothing about it.

"Ten years from now, if he survives, let's see if he's laughing then.

"It's not as if I am putting myself forward as the laureate of Parkinson's but I am aware that it could seem like that, especially to someone who had suffered and really suffered for it for much longer than I have."

People who haven't met Frank in recent years but maybe knew him as their teacher when he was head of English at the Royal Belfast Academical Institution will see that he has slowed down, that he speaks much more softly, and that his left arm twitches. He hasn't lost the whimsicality they will be familiar with but they might feel instinctively a bit more protective towards him.

Parkinson's does not kill but it erodes a person progressively.

And the damage shows.

Yet he says: "Funnily enough, I wouldn't describe it as a bad time. That would seem to me to be an exaggeration. I think if I am going to have a bad time it is going to be in the future at some point.

"At the moment, I suppose I have a tremor in my left arm, I have certainly got a lot clumsier when it comes to doing or undoing buttons or tying shoelaces or the ordinary little things that you do in the course of the day. I certainly got slower there.

"Neither of the diseases - I'm talking about the diabetes and Parkinson's - that I have got involve pain, or at least they haven't so far. I suppose the real damage that they do is that they soften you up for heart attacks and strokes and so on, but it's about seven years since I have come out of hospital and in that time I haven't had a single day's illness.

"So I suppose, I feel lucky because of that and maybe that is something that feeds the optimism."

Poets often talk of their ideas coming to them rather than them going out looking for them. They don't sit down in the morning like a working journalist with a job to finish before lunch; though some journalists might think that some poets would be more productive if they did.

Frank says: "I'm always surprised that there are certain subjects that almost put a pressure on you to write about them and there are other subjects that don't. In 2009, I spent three weeks in hospital with heart failure and I went home fully expecting to get a quarter of a book of poems out of this experience but, in fact, I never wrote about it at all.

"Yet when it emerged that I had Parkinson's disease I found myself reading articles watching material about it on TV, discussing it with a few people I knew who were my age and writing this sequence of poems and they came quite quickly over about a month or so."

A psychologist might ask at this point if the poems helped him cope, might assume they were therapeutic.

"I suppose I had some kind of half idea (that they would help me to cope with Parkinson's) but only a half idea.

"I think to sit down with some sort of intention to help yourself or of writing poems as a form of therapy I think would be detrimental to the poems themselves.

"You'd end up with something forced, something jerry built, something that didn't come naturally or had no lightness of touch about it. As it turned out these poems did come fairly easily and I didn't allow myself to become too conscious of them as therapy but I have no doubt that they helped."

In the poems he reflects on the changes in him.

In Side Effects 2 he writes, 'Gone my teacherly gulder. …The voice that broke at thirteen has again broken.'

His former Inst pupils remember him as a teacher who could take charge of a class and be a commanding presence in it. Several senior figures in the Northern Ireland media have sat in front of him while he explained poetry to them. They include BBC NI's Stephen Nolan, the music writer Stuart Bailie and Peter Rainey, who is picture editor at the Belfast Telegraph.

The new poems are already being used in Scotland to train nurses who will be working with patients with Parkinson's, for they bring to life the internal experience of the person you see shuffling and shaking, the arm twitching, the distracted look on the face.

He says: "It all began with a poetry reading I did at the Scottish Poetry Library in Edinburgh and two things happened as a result of that reading. One was that the two people who were on Mariscat Press, Hamish White and Diane Hendry, offered to do this pamphlet of the Parkinson's poems and one look at the beautiful pamphlets they had previously done and I was accepting the offer immediately.

"The other, to me, surprising development was that a teaching nurse from the Queen Margaret University approached me. She was teaching a class about neurological diseases and she had the idea previously that she might be able to use poems as a teaching aid. It would be a way of stimulating interest and emphasising certain priorities."

That nurse gave her class the poems "to read and discuss and to explore the various themes and apply them to their own work". She then challenged the student nurses to write poetry in response, using the Japanese haiku form that Frank writes a lot in himself, where each poem has only 17 syllables.

How did that go down with students who were expecting a more practical and scientific education?

Frank says: "I suddenly in the mail had 16 haiku poems arrive. And it was pleasingly evident that they had responded to the main points in the poems and I could suddenly realise how the poems might teach them something."

The connection with the hospital is ongoing. 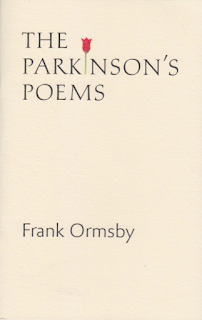 "I am writing an essay about their responses to the poems. The essay may or may not be published in a journal of nursing research. All this was unexpected but exciting as well."