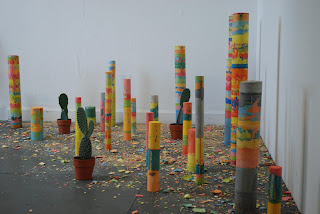 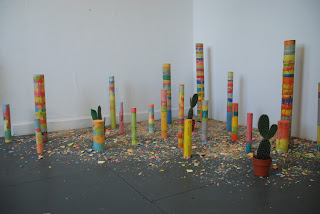 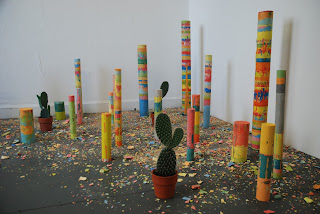 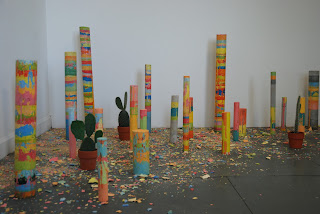 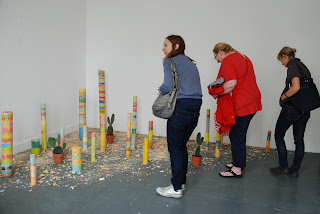 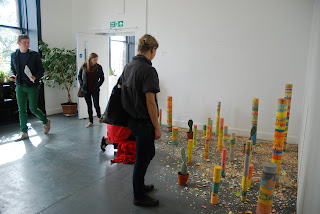 Posted by Helen Shaddock artist at 00:40 No comments:

Thanks to all those who visited me in my studio on day one of Open Studios at the South Block.

I had some really great discussions with some interesting people, and was delighted to get such positive responses to my work.

Another recommendation was the magazine Esopus, "a twice-yearly arts magazine featuring fresh, unmediated perspectives on contemporary culture from a wide range of creative professionals. It includes artists’ projects, critical writing, fiction, poetry, visual essays, interviews, and, in each issue, an audio CD.

Published by the non-profit Esopus Foundation Ltd., the magazine has a simple mission: to provide an unfiltered, non-commercial space in which creative people and the public can connect in meaningful, productive ways."

I look forward to another interesting day tomorrow.
Posted by Helen Shaddock artist at 01:00 No comments:

I have been asked by WASPs to create an installation in one of the communal spaces on the 2nd floor of the South Block. Artist and garden designer, Sue MacKechnie has been commissioned to create a planting scheme, and I want my work to relate to what she is installing. 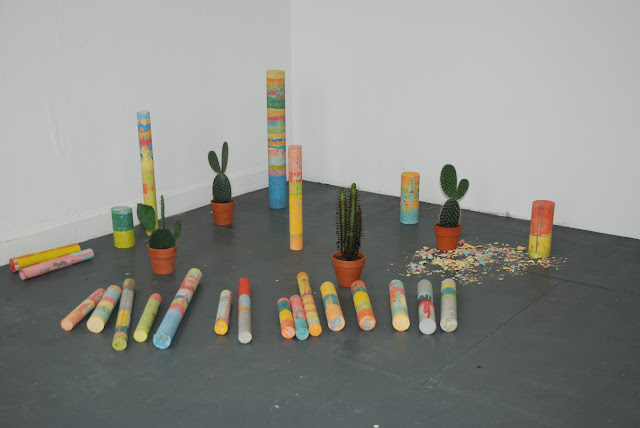 Having explored the possible options of where to locate my sculptures, I decided on a corner space opposite a planting area created by Sue. There is an area among the plants that encourages people to sit facing what will be my installation. I feel as though the sculptures will have enough space, and will be well lit due to the large windows opposite where my work will be installed. 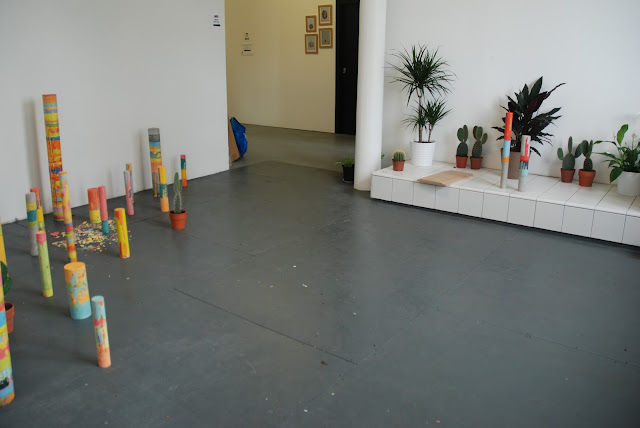 Although there is a seated area, the space is predominantly a corridor space leading to more studios. I spent some time watching how people move through the space, and used this to direct the layout of my sculptures. 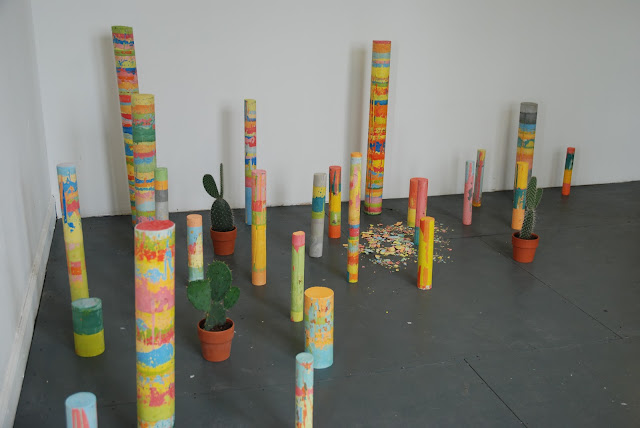 I am delighted that Sue has allowed me to use a few of her cacti in my installation. Their sculptural presence fits well with the plaster cast towers.

Posted by Helen Shaddock artist at 00:32 No comments:

I have been asked to create a sculptural installation in one of the communal spaces on the 2nd floor of the South Block studios.

Artist and garden designer, Sue Mackechnie, is designing planted areas within the range of social spaces on the 2nd floor of the South Block studios.

We met today to discuss how our work can exist together, and experimented with combining my sculptures with some of her more sculptural plants.

I am looking forward to more experimentation and play tomorrow and am excited about the result of this collaboration.

Posted by Helen Shaddock artist at 00:57 No comments:

It's that time of year again for the Merchant City festival. This year marks the launch of the newly refurbished South Block in the heart of the Merchant City. Now is your chance to meet the artists and have a look at the spaces, as well as join in with the activities in the All that is Solid cafe (see flyer below).

Please come and see me and what I am up to in my studio:

Posted by Helen Shaddock artist at 00:56 No comments:

Every month or so I send an electronic newsletter to contacts on my mailing list. The newsletters give information such as current exhibitions I am exhibiting in, events I am involved in, awards I have received, and my ongoing work.

Here is my July newsletter: 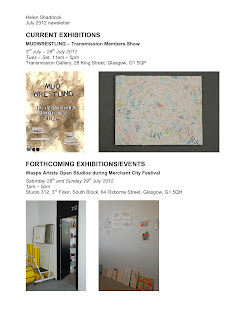 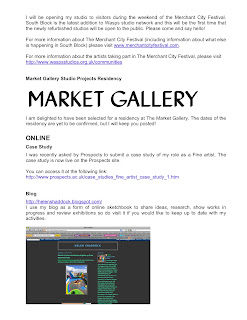 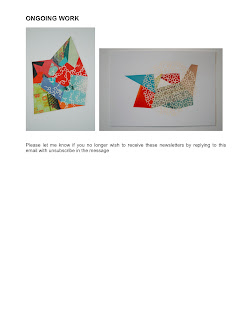 Posted by Helen Shaddock artist at 00:44 No comments:

Palatre & Leclere Architectes were given the task of transforming a rundown pre-school in Paris’s 18th arrondissement. 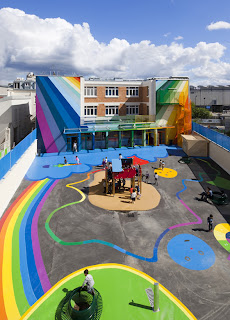 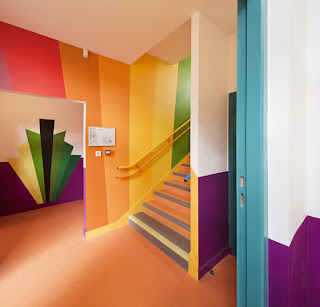 Mission accomplished - rainbow colours wash through the building, from its exterior and into the classrooms, whilst playground games are seamlessly integrated into the bold public art of its façade. 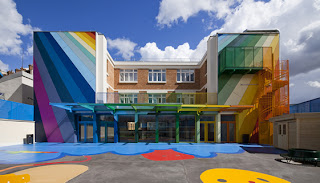 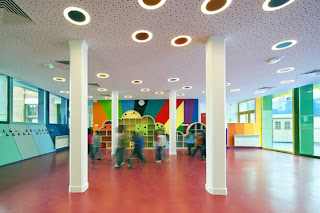 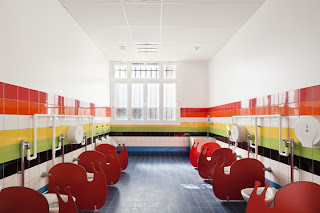 It is a great example of what can be achieved with imagination. Lets hope that it leads to many other commissions of this type. After all, a 2009 study at the University of Essex showed that memory, mental agility, reaction times and even physical strength improved when exposed to sunflowers, rainbows and other what-nots.

Posted by Helen Shaddock artist at 01:06 No comments:

I am delighted to have  been selected to take part in the Market Gallery programme. Dates of the residency are yet to be confirmed, but I will keep you posted!


http://www.marketgallery.org.uk/
Posted by Helen Shaddock artist at 23:24 No comments:

The Venice Biennale is the largest and most prestigious visual arts exhibition in the world. This will be the sixth presentation from Scotland and Venice, a partnership between Creative Scotland, National Galleries of Scotland and British Council Scotland. The 2013 Biennale will be the 55th International Art Exhibition.

The Common Guild is a visual arts organisation based in Glasgow. It was established in 2006 and presents a dynamic, international programme of contemporary visual art projects, exhibitions, and events.

The Common Guild will present projects by three of Scotland’s most compelling and consistently interesting artists: Duncan Campbell, Hayley Tompkins and Corin Sworn. The exhibition will be presented in the Palazzo Pisani, Venice from June to November 2013.

Previous Scotland + Venice presentations have included Karla Black (curated by the Fruitmarket Gallery) in 2011 and Martin Boyce (curated by Dundee Contemporary Arts) in 2009.  The 2013 project will mark 10 years since Scotland’s first participation, in an exhibition that included Claire Barclay, Jim Lambie and Simon Starling.

‘The Scotland and Venice partnership is delighted to announce its plans for the 2013 exhibition.

‘Since its establishment ten years ago the Scotland and Venice project has emerged as a significant international platform, promoting artists at the highest level internationally and building Scotland's reputation as a centre of excellence in and for the visual arts.

‘The exhibition will showcase the vision, imagination and skill of the artists selected and we are looking forward to working in partnership with The Common Guild, who bring their significant knowledge and expertise to the project.’

“Scotland is a creative and innovative nation, boasting a wealth of artistic talent. The Venice Biennale, as the largest arts festival in the world, is an ideal platform to showcase our talent to a global audience.

“I am sure that the Scottish presence in 2013 will build on the tremendous success of previous years, which saw exhibitions from Turner Prize-winning artist Martin Boyce and nominee Karla Black.”

“It is remarkable to think of all that has happened with contemporary art in Scotland since the first participation in the Venice Biennale back in 2003. This project will continue to foreground our artists and the wealth and breadth of talent here in a hugely significant international arena. We are very much looking forward to working with Duncan, Hayley and Corin in this context.”

Scotland + Venice 2013: artists
Duncan Campbell is known for his film works that blend archive, documentary material with fictional, imaginary elements. His films, which have been described as “slippery biopics”, have focused on often visionary protagonists, such as car-maker John DeLorean (‘Make it New John’, 2009) or Irish political activist Bernadette Devlin (‘Bernadette’, 2008).

He welcomed his inclusion in the project and added: "I am extrememly pleased to be representing Scotland at Venice next year. For an artist, the biennale represents a unique opportunity: to make work that has currency as well as being part of the general hoopla. I am excited by this challenge. I am grateful to the Common Guild for the compliment they have paid me".

Corin Sworn creates atmospheric installations that weave fiction and history through film and objects. She is currently artist-in-residence at St.John’s College, Oxford, in association with the Ruskin School.
Sworn said of her participation in the project:
“The prospect of working in Venice feels both formidable and thrilling and I look forward to seeing what work I can make for this dramatic and intriguing atmosphere.”

Hayley Tompkins  makes intensely delicate paintings and painted objects that she describes as being sampled from the world as we know it. She was short-listed for the 2004 Becks Futures Prize.Tompkins said:

“I am delighted to exhibit at next year’s Venice Biennale, and to be working with The Common Guild. I look forward to imagining a new work and seeing it installed in such unique and historic surroundings, a mysterious place like Venice. It's a wonderful opportunity for any artist.”

The 2013 exhibition continues The Common Guild’s commitment to dynamic internationalism, and builds on the organisation’s reputation for presenting artists’ work in interesting and engaging ways through world-class contemporary art experiences and discussions. It will involve new works by the three artists in diverse forms and materials.
Posted by Helen Shaddock artist at 01:29 No comments: 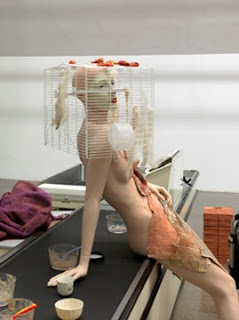 Studio 58: Women Artists in Glasgow since World War II is an exhibition and accompanying publication examining the period between World War II and the present day when women artists in Glasgow have been at the forefront of the art scene in the city. The title of the exhibition comes from the studio located on the top floor of the Mackintosh Building which historically was the dedicated work space for women students.

In recent years, a number of highly regarded women artists have emerged from the Glasgow art scene, including Turner Prize nominees Christine Borland, Cathy Wilkes and Karla Black.  Studio 58 will contextualise the work of contemporary women artists in Glasgow through documenting and displaying the little known and under-represented lineage of women's art in the city from 1939 onwards, within the frame of the city's art school where all of the artists included in the exhibition either studied or taught.

The most well known period, 1890 - 1930, has been documented in several publications and the recent exhibition 'Glasgow Girls' (2010), however the post-World War II period has not been subject to the same level of analysis. Studio 58 is organised around four thematic strands:  landscape/still life, body/self, printed matter and photography/film and will focus upon the work of over 50 artists active from the late 1930s onwards.  The artists include Margaret Morris, Mary Armour, Ivy Proudfoot, and Kathleen Mann, as well as those that followed them including Joan Eardley, Margot Sandeman, Bet Low and Sam Ainsley and younger artists such as Cathy Wilkes, Claire Barclay, Victoria Morton, Hayley Tompkins and Karla Black.

Posted by Helen Shaddock artist at 01:02 No comments: 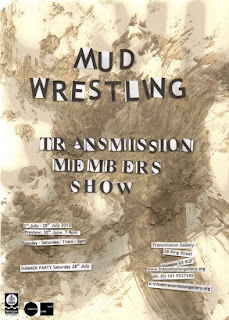