Transparent is a collaborative exhibition from Polish artists, Konrad Smoleński and Honza Zamojski, presented through a multimedia installation and performance.

One by one they enter the space, take off their shoes and trousers, drink some water and walk to the line of megaphones. Each picks up a megaphone and instructs the audience to watch the performance from outside the gallery. They reposition the megaphone on the floor in the line and walk over to the moving treadmill. In turn they jump onto the treadmill and begin to walk. 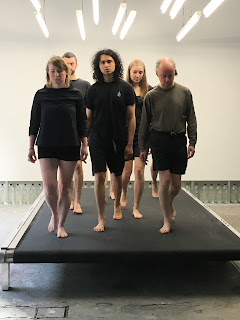 This could appear to be rather grim, a group of individuals dressed in black, expressionless, marching at a consistent speed. Unable to escape the monotony of the platform.

However, I read it as more positive. It is not a military procedure. They maintain their individuality. Different strides. Different rhythms. But they also work as a group.

I liken it to how the wider world can operate. People are aware of each other, and act together to keep things constant, consistent and in motion, yet they are also able to maintain their own identity. 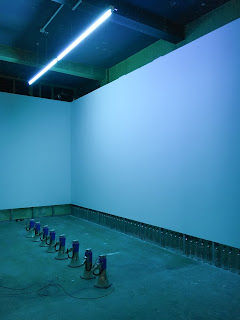 I really enjoy the way that the artists have made use of the large window space that separates the inside of the gallery from the pavement and main road. The gallery is positioned just opposite a bus stop; an ideal location to engage with the public. The treadmill is the same length as the window, and people are encouraged to view the performance from outside the gallery as well as inside.

Between the hours of 10am-3pm and 5pm-6pm (when there is no performance happening), the light remains on, highlighting the apparatus (treadmill and megaphones) that come into action when the performance happens.

'The project has evolved from an initial concept, which sought to explore models of art education that differ from those in the UK: specifically looking at the pedagogical practices of Polish professor, Leszek Knaflewski and his relationship with former students Konrad Smoleński and Honza Zamojski. Leszek Knaflewski sadly passed away in 2014 and the initial project could not be realised.

The project has developed into a collaboration between Smoleński and Zamojski as an experiment into their own artistic practice. Allowing them to take risks outside of a commercial gallery context, relax their everyday practice and redefine their artistic language in order to work together to create a new, communal platform and outlet for the unknown and poetical.

The framework of an institution like University of Arts in Poznań, allowed the relationship between Professor Knaflewski, Smoleński and Zamojski to dynamically thrive and evolve; roles could be reversed and power structure played upon, shifting and removing preponderance. Differences could be shared and considered as a resource.

Knaflewski’s pedagogical ambiguity, his ability to embrace authority and anarchy and to inspire and allow freedom has been influential on Smoleński and Zamojski’s respective practices and on shaping this particular project. By reflecting upon Knaflewski’s and their own methods, they have merged their individual artistic languages to create a fusion: two different set-ups of relations – one based on exchange and order, the other on chaos. Polarities brought to unity.

In this context, the complexity of relationship is seen as a system, therefore Transparent is a response to this relationship and can be thought of as a variable system; it comes on and off with a fluctuating rhythm. The system changes from active to passive and becomes a magazine of information and potential; the readiness of sleeping energy; the stage of becoming; the communion of nothingness.

Transparent features configurations of objects and humans, humans and architecture and exhibits, institutions and individuals. Within a carefully structured environment and a precisely scripted scenario of live action, humans animate the system regardless of bounds to establishment and restrictions. Humans excite the inanimate world to vibrate, bringing a dynamic that makes the system flexible. By employing simple elements like movement, water, rhythm of actions, order and vibrations – the image of potentiality is created, a potentiality that ultimately remains humane. This event is a snapshot – this abstract form of dissected actions and system becomes an anthropological artefact.'

For more information about the artists please visit:

Posted by Helen Shaddock artist at 03:03 No comments:

My work featured on the Listening Booth

Today is the launch of my audio track 'Harder, Faster, Better, Stronger' on the Listening Booth. 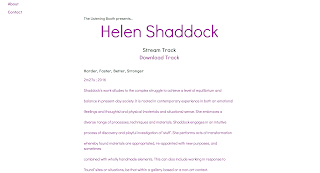 It is available for free streaming and downloading so you can listen to it anytime and anywhere!

It will remain on the Listening Booth from today.

While you are there, check out some of the other tracks by other artists/musicians/audio folk!
Posted by Helen Shaddock artist at 11:49 No comments:

Congratulations to the third year fine artists at Newcastle University who exhibited in the group show, Macrame Cod was waving not drowning / Macrame Cod was not waving but drawing at NewBridge Annex and PH Space. It is often the case that group shows of this nature, (where artists are exhibiting together because they happen to be studying in the same institution at the same time rather than because their work / process and ideas are related) can seem disconnected. In this instance the curators had done an excellent job at making the exhibition work as a whole and drawing out connections between the works.

One way in which this was done was by designating a large space on a wall to the display of two dimensional printed matter by different artists. Despite the range of styles, sizes, colours and content of the works, grouping them on a wall helped link work together and form relationships with some of the three dimensional work. Simple things such as the presence of circles throughout the exhibition helped draw works together.

Posted by Helen Shaddock artist at 02:52 No comments:

Today was a big day in terms of our artwork Trigger. We drove up to Kielder Forest and Water Park where we had access to the Art and Architecture studio for the day and were going to prepare the structure ready for installation. 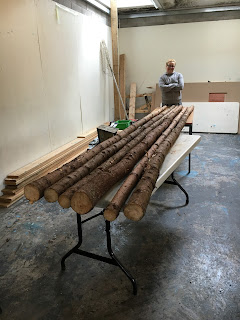 The Forestry Commission had kindly delivered the timber from Kielder that we requested to use for the posts for our structure. 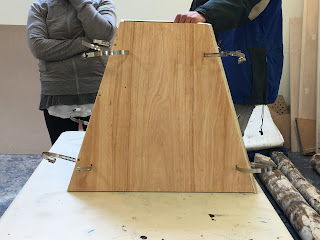 Our first task was to attach the jubilee clips to the box in which the equipment will be housed. The jubilee clips will hold the posts in place and attached to the outside of the box.

With only 3 pairs of hands, 4 posts at over 4metres long, and a set of ladders that were slightly too small for our needs, erecting the structure fully was rather challenging and took many attempts. 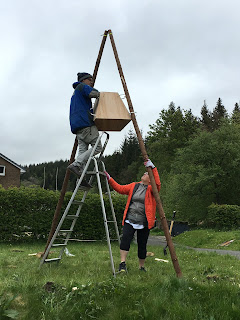 On the patch of land outside the studio, we measured out the distance between the poles at the base of the structure and dug 4 holes in the ground in which our poles would fit in. We hoisted the 2 diagonal poles and marked the angle and position where the coach bolt should go in order to attach the two poles together. 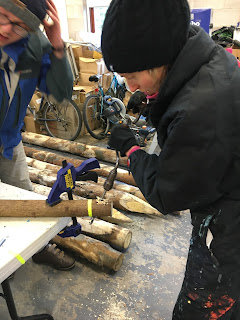 Back on the ground, I then used a hand borer to bore the holes through the logs.

We then hoisted the diagonal poles together and Eddie positioned the coach bolt inside the posts. 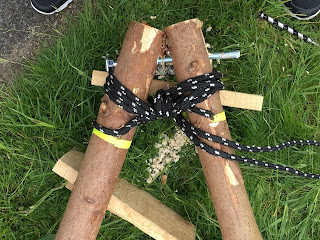 Following the same procedure for the other diagonals was impossible, and we came across various problems such as the coach bolt being too short because we had to go further down the pole in order not to meet the other coach bolt. We did mange to get 4 poles up and into position with the holes for the coach bolts in place. On the actual day of install we will need double the number of people (6 in total) to enable us to safely get the poles in place, bolted together and attach the box to the poles. Lets not forget that we also need to get the solar panel connected to the box and the speaker, and then to decide upon the suitable volume for the audio!

Any volunteers greatly appreciated! Please contact me (email address below) if you are up for a challenge!

helen.shaddock@yahoo.co.uk
Posted by Helen Shaddock artist at 02:44 No comments:

More photos of setting up Circus Between Worlds

I was recently sent some additional photos taken by Mark Pinder from the Circus Between Worlds event. Here are a selection of images from the setting up of the Circus and rehearsals.


Along with Deanna Smith and Sarah Grundy, and I was one of the performers in Deanna's performance.

Charlie Dearnley kindly assisted me with my performance.

All images copyright of Mark Pinder, 2016

KEILDER: ON SITE / OFF SITE is a collaborative project initiated by Newcastle University’s Fine Art Department and The Keilder Partnership, which commenced in summer 2015. The ambitious year-long project set out with the aim of practically exploring the opportunities of the unique environment of Kielder Forest for visual art. The project will culminate in the creation of a group of semi-temporary works created by staff and students to be sited in the forest and Keilder Observatory (launching 17/06/16).

OFF SITE is an exhibition of work created by participants of the project. 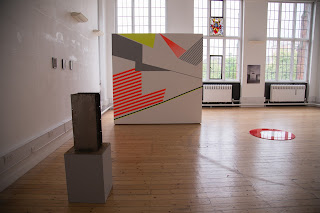 It is housed in the Ex-Libris Gallery opening a month before ON SITE launches in Keilder Forest and Water Park. 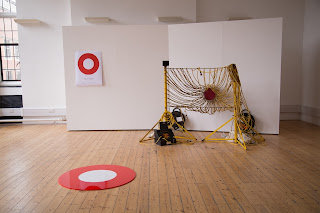 The exhibition provides an insight into the working methodologies of the artists involved and serves as a space to critically question the notion and importance of location, scale and collaboration whilst working both in and outside the conventional gallery setting. 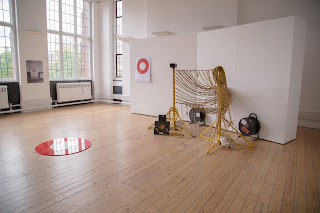 The exhibition contains a variety of works spanning from different stages of the project, from conceptual and technical drawings right through to finished works yet to be installed on location. 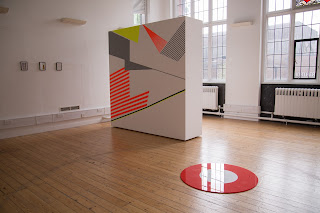 Some artists have used the opportunity to create a new work linked to their work to be sited at Kielder, but specifically for the gallery context. 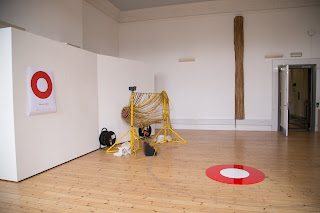 A temporary and short exhibition run has lent itself to creating works on site which suggest at the possible outcomes of some of the projects involved. 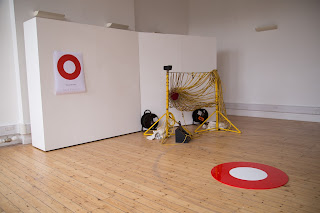 
KEILDER: ONSITE / OFFSITE is funded by The Bartlett Fine Art Endowment, and supported by The Forestry Commission, Northumbrian Water and Keilder Art and Architecture.
Posted by Helen Shaddock artist at 03:01 No comments: