Frank Ormsby on The Art of Living

My research into research auditory and visual hallucinations has revealed that these experiences are more common than I first was aware of.

In a recent episode of the BBC Radio 4 programme, The Art of Living, the poet Frank Ormsby discusses how his life has changed since he was diagnosed with Parkinson's Disease. His medication, he believes, has aided his creativity. But it has also induced hallucinations. He finds himself sitting on his own in his study but surrounded by people, by the ghosts of his mother-in-law and unidentified visitors. And he's also haunted by a fear that the earth will open up and swallow him.

When he was diagnosed with Parkinson's Disease, his response was unexpected. He embarked on a newly fertile creative period, documenting his experiences and finding a voice in his poetry that he was beginning to lose in his daily communications.

His first act was to search Google - for jokes. "Which would you rather have, Parkinson's or Alzheimer's. Obviously Parkinson's! I'd rather spill half my pint than forget where I left it."

As he discusses with Marie-Louise Muir, the illness has changed him. It's mellowed him. After a career as a school teacher, his daily life is now quieter and more solitary. There's a poetry, almost, in his pauses and silences. 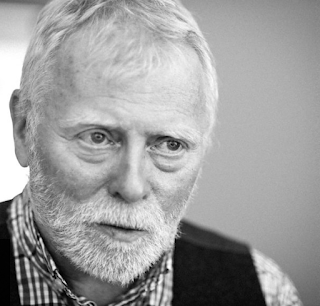 I find his following poem about his hallucinations very powerful

at the corner of my eye

they fade in fade out

melt into elsewhere before i can see faces

who is that girl i sense at my shoulder?

who is that dancing lazily on my table until i look up?

are they playing a game?

do they mean me any harm?

not one has appeared twice or uttered a sound

he is strangely human

and visible all the way

so used to them have I become

and called it Jean

and asked about an imminent journey

when I looked in its direction it disappeared

not much conversation to be shared with a neurological disturbance

everyone else in the room

if indeed anybody else was there

and a lonliness beyond reason began to take hold

and things impossible lost themselves again

in a round of regrets

there was no breakthrough

there was no crossing of lines

so still they sit

sometimes on every chair in the conservatory

with a taste for line dancing and country music

at times they exude a kind of homelessness

displaced beings crashing at my pad

they have the fearsome patience of invalids

whatever it is they are waiting for

Posted by Helen Shaddock artist at 16:10