The visiting artist at Newcastle University this week was Catherine Yass, the London-based artist. Abandoned urban spaces and sites in a process of construction or deconstruction are of interest to Yass, and often feature in her work. People are usually absent from her work, but this is not the case in High Wire (2008), a multi-screen film and video installation. 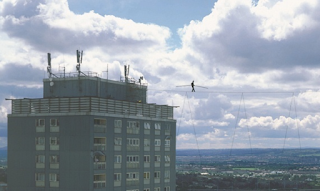 High Wire (2008) was filmed at the Red Road housing estate in North Glasgow. When it was built in the early 1960s, Red Road was the highest social housing in Europe, a major achievement for the city planners who sought to rebuild the city. Yet in 2008 it was due to be demolished.

Akin to the utopian principles that were in place at the time that the Red Road housing estate was built, Yass wanted to make a work about "walking in the air, out of nothing." She advertised for a tightrope walker to walk between two of the high rise buildings at Red Road. 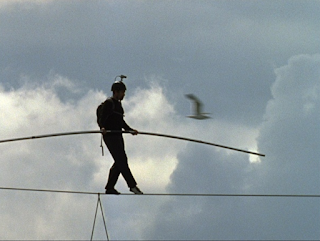 Yass worked with French high-wire artist Didier Pasquette. In the talk Yass spoke about her unease when Pasquette told her that he did not want to wear a safety harness. Her terror increased as Pasquette began the tightrope walk and it became clear that the weather conditions were much worse than had been forecast, and Pasquette would need to turn round. He edged his way back to the starting platform. 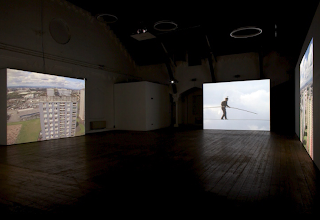 Yass spoke about how she considered not exhibiting the work as the intention of Pasquette walking from one building to the other had not been fulfilled. However, she began to see this as a strength of the work. I believe that it echoes the situation at the Red Road housing estate; grand ideas of what would exist turned out to be unachievable, and this adds another layer to the work.

Posted by Helen Shaddock artist at 13:10