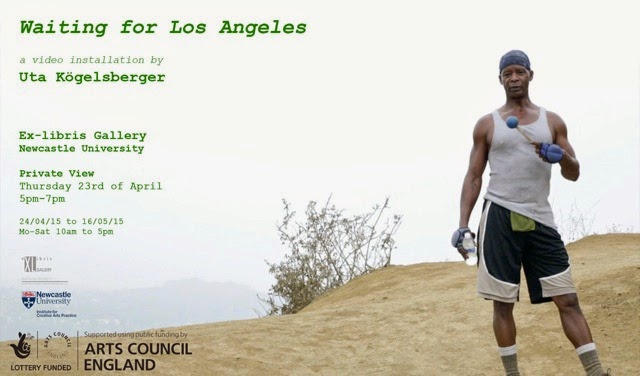 Waiting for Los Angeles is a new video installation by Uta Kögelsberger. The project grew out of the artist’s fascination with Los Angeles as the quintessential post–modern city; a city that defines itself through its tendency to ignore any form of coherence, its idiosyncratic city-image, its horizontal structure and its cultural diversity; all of which make up its attraction as much as they make any form of representation an impossibility. In spite of this resistance to representation, people all over the world have a mental image of Los Angeles.
The work is shot on a seemingly non descript natural platform located in Griffith Park – one of the few truly democratic public spaces in the city that attracts people from all walks of life. Griffith Park was donated to Los Angeles with the proviso that it was to remain untouched, uncultivated, and open to the public. Shot over a two year period, and edited down from 360 hours of footage, Kögelsberger’s video builds on the premise that if you stand in one spot in the park long enough, you no longer need to move through Los Angeles to see it; instead Los Angeles will move past you. The platform acts as a stage for the city to perform itself. People enter and exit like performers in a play with non-scripted conversations and actions: a 21stcentury Waiting for Godot in Los Angeles, where nothing is really said but where all the little nothings add up to paint a portrait of this city that leaves so much up to the imagination.
Uta Kögelsberger is based in London and lectures at the University of Newcastle and most of her work is developed in the United States. She has previously been awarded the Stanley Picker Fellowship, the Berwick Gymnasium Fellowship, the EAA Award for Art in Architecture and the SPD silver medal for editorial photography. Her photo essays have been published in Wired (USA, UK, Italy), Esquire (Spain), Quo Magazine (Mexico), GQ (South Africa) and selected for American Photography. Her work has been exhibited at the Architectural Association, London; CGP, London, the Barbican, London; Bluecoat, Liverpool; Spacex, Exeter; Laurence Miller Gallery, NYC and the Glassell Project Space MFAH, Houston amongst others.
Posted by Helen Shaddock artist at 03:07