A couple of weeks ago Hannah King from Forces News visited 133 Sidney Grove to do some filming and interview Wunderbar Artistic Director, Ilana Mitchell about the installation. The film has now been broadcast and can be viewed here:

Newcastle exhibition in a terraced house is extended due to popularity

A museum exhibition is showcasing the role of women during the First World War.

The role of women in the First World War is being explored in an exhibition in Newcastle. It looks not at their part in the war effort - but rather their essential role in keeping households running.
'Great & Tiny War', by artist Bobby Baker, celebrates the women who stayed at home, bringing up children, feeding families and keeping households running while the Great War raged on.
Situated at 133 Sidney Grove, visitors are shown around the exhibition by an audio guide, telling stories about women's lives during the conflict.

Each room is dedicated to women’s domestic experiences during World War One –  an aspect of history Artistic Director of the project - Ilana Mitchell believes is often overlooked: "The focus very often on war is about the fighting, the politics.
"Very often work that is traditionally women’s work, housework, domestic work, is overlooked as something that is valued."
One downstairs room has been dubbed the 'Baked Armoury' and is filled with artistic sculptures, from a dove and a pineapple to barbed wire.
All the artwork has been baked by women with a diverse connection to warfare; some are refugees, whilst others are veterans.
"We started off with the idea of baked weapons," Ms Mitchell told Forces News.
"We worked with bread dough which is a very funny sculpture material because it’s very uncontrollable and also very domestic.
"Actually rather than weapons, most of the works are sort of amulets – sort of more protective, more gentle-seeming." 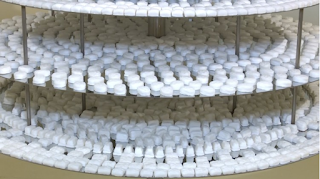 The final room contains 4,701 peppermint creams, designed to represent how many meals a family at home would have aimed to eat during the 1,567 days of the Great War.
Bobby Baker’s 'Great & Tiny War' will remain open to members of the public until 28 November 2018.
Posted by Helen Shaddock artist at 11:55