TRIGGER Install at the Observatory, Kielder Water and Forest Park

After much preparation, today was the big day; installing TRIGGER at our chosen site by the Observatory at Kielder Water and Forest Park.

On arrival we surveyed the ground where we had planned to site the work. The area around had become rather overgrown with grass and cotton plants, but we were surprised to find that the exact spot that we had marked out  previously for TRIGGER was pretty much the same. Even the 4 twigs we had put in place to mark where the structure was to go were still in place! 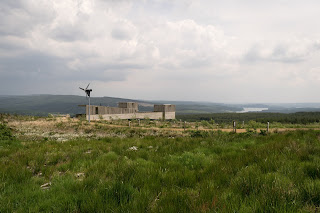 We began by measuring out the area where the posts were to be instead, and dug the holes for the poles to be inserted into. The ground was very soft, and we were able to scoop out the material (it can hardly be described as earth!) with our hands. The smell was overpoweringly disgusting, and I dread to think what it was that was producing such a pungent smell! 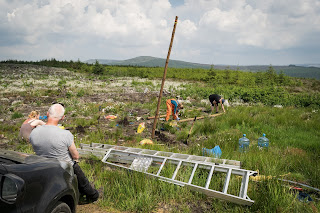 We then measured the each pole and marked the place of the pole that should be at ground level. We also measured the depth of each hole and calculated how much of the bottom of the tree pole we needed to saw off in order for the post to be the right size. 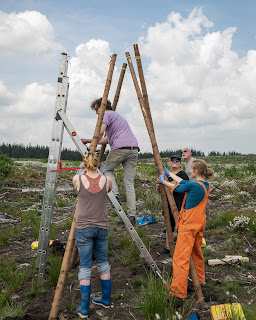 Having already determined which pole needed to go into each hole, our next task was to insert each pole into each hole. Thankfully we had a very willing and able troop of helpers at hand! 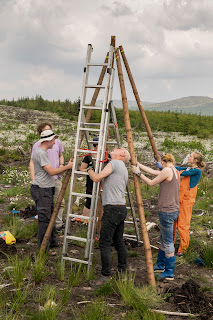 Once the posts were meeting at the top, we inserted the bolts into the holes we had drilled in the posts on our last visit to Kielder. 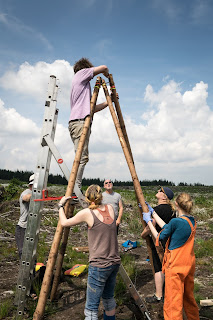 Amazingly, the bolts fitted into the holes with very little difficulty, and the structure was rather secure. With a little bit of wiggling and readjusting, we were able to get the structure upright and level.

We then unwrapped the box which already contained the speaker and USB. The solar panel had been attached.

We hoisted the box up inside the legs, and tightened the jubilee clips to hold the box onto the posts in the correct place. 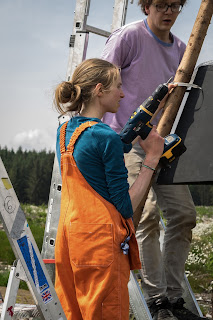 Before we tighten the jubilee clips securely, we ensured that all levels were even and that the box was in the correct place and at the right angle. We also tested that the audio was working properly to ensure that we wouldn't need to take the box off the posts. All was good to go! 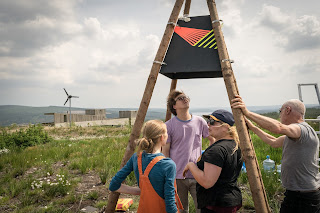 We poured water into each of the holes in the ground and poured postcrete into the holes and waited for about 20 minutes for it to solidify. 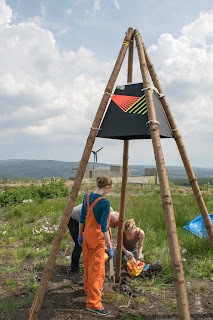 We tightened the jubilee clips and bolts and then applied the finishing touches such as the bands of coloured tape at the top and bottom of the posts. We also added a couple of additional stripes to the box to make it more eye catching. 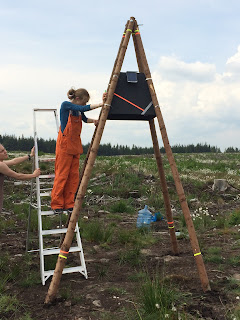 We spent some time adjusting the volume of the audio. After a good wipe over and few last touches of black paint we were able to stand back and enjoy the results! 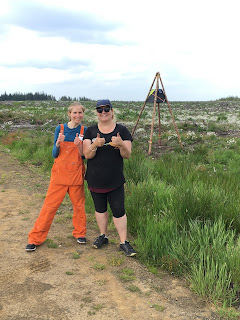 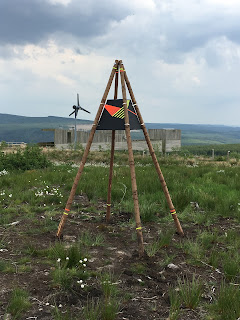 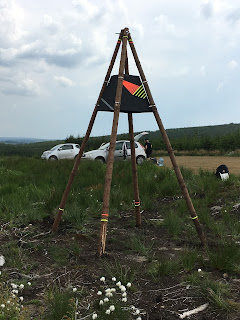 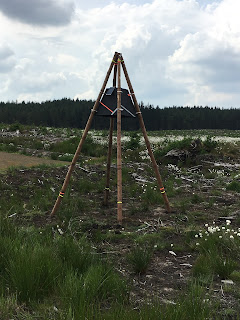 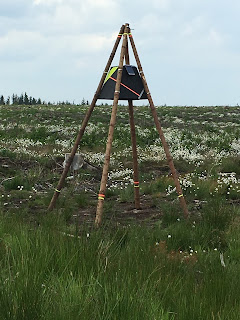 We would like to thank everyone who helped with the install, and everyone who assisted us on the way. It has been a pleasure working with you and we hope that you enjoy the resulting artwork.

More details of the launch and exhibition duration will be issued shortly.


Posted by Helen Shaddock artist at 12:31