It will be alright setup in Project Space

Recently I have been working on a sound piece called It will be alright. It features my voice and consists of 6 vocal tracks that are layered over each other. A few short sentences are repeated throughout, but the tone and volume of the voice varies. 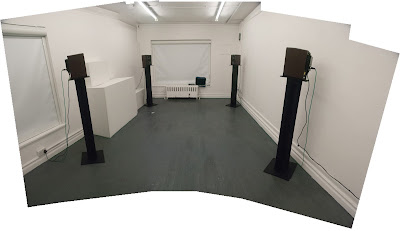 Over the past few days I have been working in the project space to try different set ups of the installation. I used 4 speakers and connected these to a sound card which was connected to my laptop. There were 6 channels going into the speakers, so 2 of the speakers had 2 voices at once.

Working in the space, I edited the audio so that the audio came from different directions. I made stands for the speakers to be placed on so that the sound comes from head height as opposed to the floor or the room in general. I composed the sound to produce tension between the speakers, rather like two voices were arguing with each other from different side of the room. My intention is that the audience are surrounded by the sound, and immersed in the situation. In order to minimise the distractions and focus attention on the audio, the blinds were drawn so as to make the room as dark as possible. 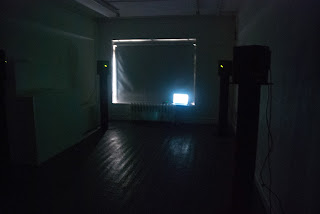 Following my crit on Tuesday, I made a few changes to the audio (removing a few of the phrases from the work, adding more pauses etc), and then invited people to come to listen to the work on Wednesday.

It is important to me that the audience listen to the whole of the work, as opposed to being able to enter at any point and leave before the end. I therefore chose not to show it on a loop, but instead allowed the viewer/s into the space, told them the work would last about 6 minutes and that I would leave and close the door.

I waited outside the space until the audio had ended, and then opened the door, allowing the viewer to leave.

I talked to many people about the work once they had experienced it, and received some very useful and positive responses.

It became obvious that the work has a powerful impact, and in a couple of circumstances, people were moved to tears.

I want to make a few adjustments to the setup of the installation, such as finding a way to hide the speakers, the laptop and equipment. People commented that the light from the devices was off-putting, and that the speakers had too much of a presence in the space, and became like figures due to their height. In order to overcome these issues, I would need to build a darkened room, and position the speakers and equipment behind the walls.

I am considering whether there should be a limit to the number of people who can experience the work at the same time. One of the people who was brought to tears by the work told me afterwards that she would not have been able to respond so emotionally if there had been another person in the room with her.

Posted by Helen Shaddock artist at 10:58