The visiting lecture this week was from Yelena Popova. She is currently exhibiting in the group exhibition, UNsensed at the Hatton Gallery in Newcastle. 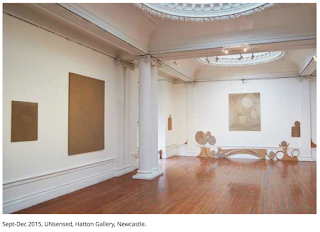 I enjoy the playful positioning of the wooden 'props' and the way that the paintings are balanced on these. At times, Popova has props paintings against chairs, moving the work in more of a sculptural realm.The arrangement of these elements resemble how they may exist in the studio, and thus hints at the role of process within the work. 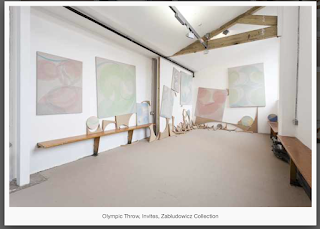 Prior to exhibiting work, Popova sets it up in the studio and takes a photograph of the arrangement. 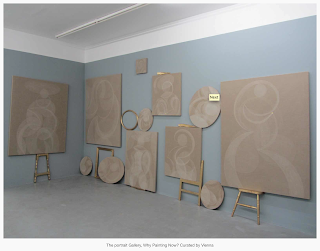 In the recent work, Popova's use of colour is limited, choosing to use white ink on naturally coloured linen. 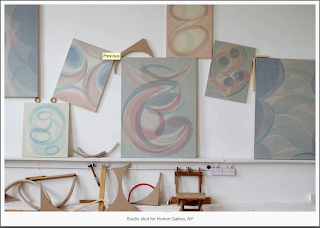 The linen alone is a beautiful surface. In earlier work Popova has used coloured pigments, preferring to limit the number of colours and tones within each painting. Other work used brighter colours, giving the work a different energy.

It is clear that Popova is very good at making work for a specific context, be it in a gallery, a stately home, or as in the work above, specifically for a collector. Her awareness that collectors need to transport their work wherever they travel, and that sometimes this limits the way work is seen, prompted her to create a series of works that would be made specifically for transporting in a flight case, and therefore would be viewed in the way she intended. When folded out, the paintings have a sculptural presence. 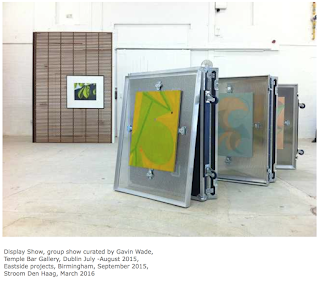 "Popova’s practice encompasses painting, video and installation, and all her work is tied together by an interest in exploring the concept of balance, whether in politics, representation, or in our relationship with machines.

With their transparent, softened geometric forms, Yelena Popova’s paintings recall the graphics and aesthetics of both Russian Constructivism and Minimalism, and open up conversations about the materiality of painting today.

“I’m not interested in making single objects, but in creating a complex network of facts, fictions, emotions, gestures, materials and images, which could relate to the world outside it,” the artist explains.

For a recent project she made paintings and video inspired by the metaphor of the discus thrower; the elliptical curves and repeated, rhythmic shapes on her linen canvases articulate the kind of balance, external and internal, expressed through fixed rotation. Popova’s films, which deal with overt imbalances such as Cold War topics and radioactivity, seem the perfect counterpoint to her 2D work, the flipside of the same theme.

Balance of Probability is a multi-part installation of paintings on linen that plays with similar ideas. The canvases in a range of sizes combine graphic pattern and unpredictable shapes with a delicacy of touch and thin gradients of pale colour that sometimes even show the grain of their linen surfaces. Precariously arranged on each other or held in place with makeshift pallet supports and even a doorknob, the paintings convey a sense both of dangerous asymmetry and of harmonious interconnectedness."

Posted by Helen Shaddock artist at 02:36