Over the past week I have been curating the work in my exhibition space as part of the Newcastle University MFA Summer exhibition 2015. It has been an enjoyable experience, and one in which I have really challenged myself, surprised myself, and explored all kinds of setups.

I feel as though I am working in new terrain and speaking a new language, and that is exciting. After all, I embarked on the MFA knowing that I wanted to push my work, move it forward and challenge myself. I feel pleased to have used this first year of my course to work in new ways and go out of my comfort zone. The work that I have made, and the way it has been exhibited is certainly different to what I was doing a year ago. I wonder what I will be doing this time next year!

It's hard to believe how much the exhibition has evolved over the past week.

I knew that I wanted to introduce something with height, but felt that the material used in this case (rubble bags) was not right. 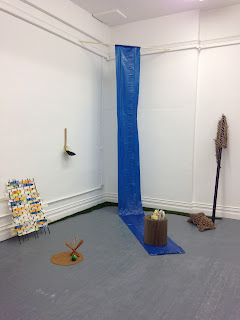 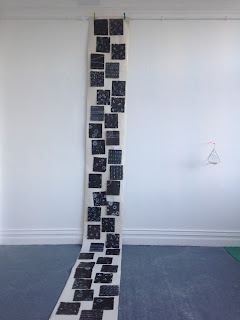 I considered different ways of displaying the seaweed, including on a roll of lining paper, on the floor, in a non-grid pattern, but decided to opt for 121 pieces of seaweed in a grid on a large piece of fabric hanging against a wall. 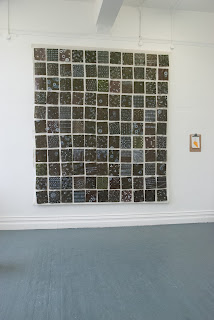 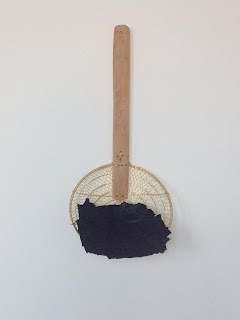 A number of works have gone through a shift of materials, for instance the seaweed in the skimmer was replaced with the same shape made from rice paper. Also, the shredded cardboard on the aluminium rod was changed to the lotus leaves. 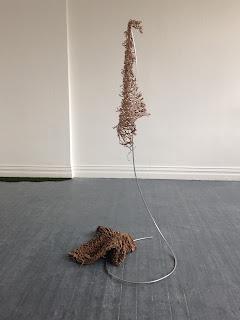 I considered drawing more attention to features in the space such as the taps and plug sockets. I decided to keep a more minimal aesthetic and focus the attention on the work as opposed to the space per se. 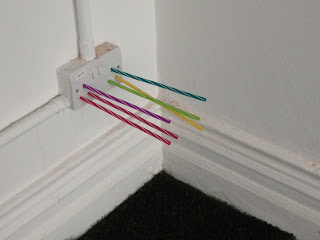 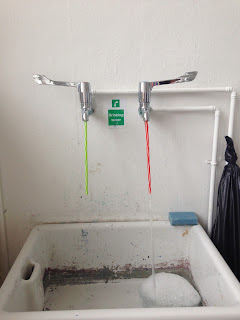 I was thinking about using a strip of lining paper on the wall which showed traces of where objects had been placed on it due to the faded patches, but decided not to include the paper as it wasn't really adding anything new to the exhibition. 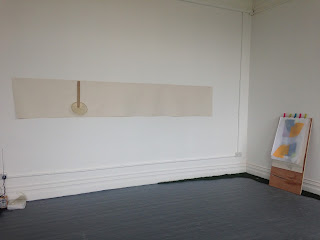 I tested various methods to display the same items. For instance, the screen prints were once pegged onto a large board with brightly coloured pegs, and propped against the wall. 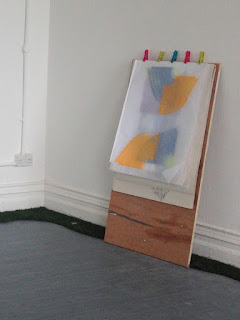 I gradually decreased the number of works in the space, and therefore left out some works that I had originally intended being in the exhibition. I am pleased to have included less because it gives each of the works its own space in which it can be appreciated with few distractions. 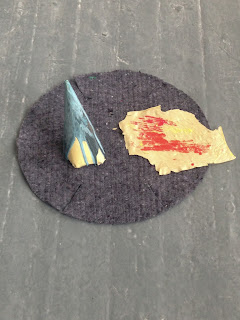 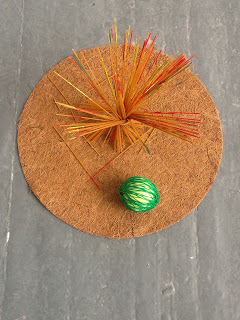 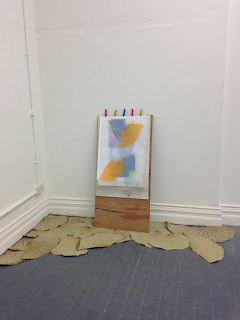 Posted by Helen Shaddock artist at 20:08