For this exhibition, Himid is said to have been inspired by the Kanga, a vibrant cotton fabric traditionally worn by East African women as a shawl, head scarf, baby carrier, or wrapped around the waist. 'Typically, kangas consist of three parts: the pindo(border), the mji (central motif), and the jina (message or ‘name’), which often takes the form of a riddle or proverb.' 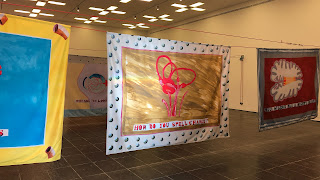 Himid has suspended a number of cloths on three loops of rope, each of which span the width of the gallery and are positioned behind each other. Each cloth features an image of inner body parts and a statement borrowed from influential writers such as James Baldwin, Sonia Sanchez, Essex Hemphill and Audre Lorde. Himid's intention was to enable viewers to rearrange the cloths using the pulley systems. Although visitors can move the pulley, there is no way to change the order of the cloths or words and so one can only change the size of the gaps between the cloths.

I was disappointed in the execution of the work and found the participatory elements to be limited. The cloth used was a synthetic kind that had been digitally printed on, and so the traditional, handmade quality that is often associated with flags was not present. The concept behind the work was well meaning, but I question how much the artwork communicated this to an audience.
Posted by Helen Shaddock artist at 17:31