Over the past few days I have been learning how to use the green screen and chroma keying in order remove a specific colour from a video scene and replace it (keyed) with a different element. This is what broadcasters use when they replace the original background with an alternative background.

I want to create an animation of a figure spinning, and for it to be projected into a space so that it appears that the figure is in the space where the work is being played.

I used the green screen to record me spinning, but when editing the footage it was not possible to remove all the green as there was a green halo around me. 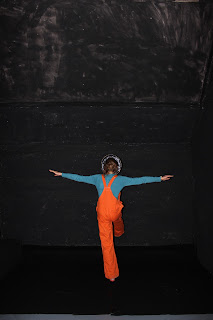 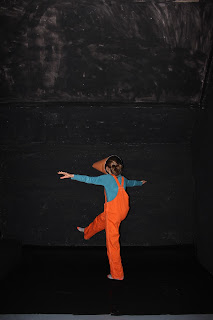 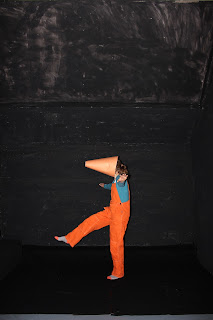 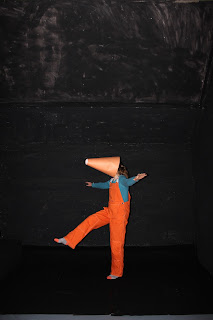 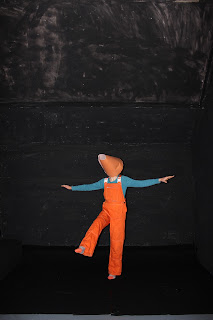 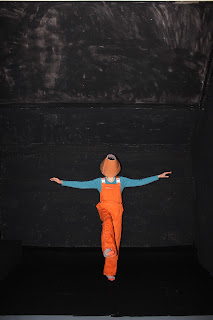 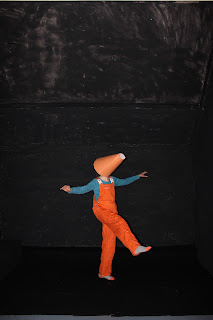 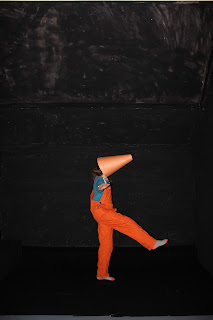 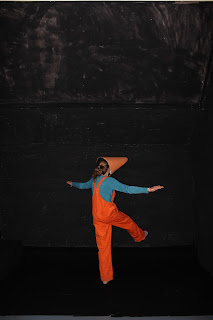 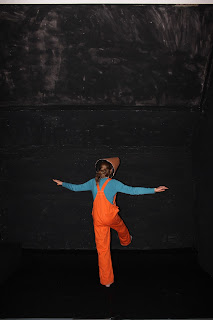 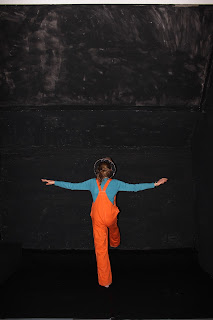 It is surprising how much black fabric is needed in order for the whole of the figure to remain in front of the black for the duration of the spinning. I used 2 different types of black fabric and found that one was too reflective but the other worked well as it was matt black.

I then tried setting up in a room with black walls, and covered the floor with the matt black material. This was successful, but the black walls were not quite black enough to produce the effect that I need.

I also tried wearing a different outfit. Rather than wearing black clothing which could appear rather dull and serious, I wore my orange dungarees and a teal blue jumper as well as the orange funnel I made for a previous performance. I wanted to try to avoid the video being read as a comment on body image and the female figure, and changing my outfit helped with this. The bright colours and sculptural cone also added to the aesthetic of the work. Wearing the funnel on my head is extremely disorientating because my sight is restricted. This makes it even harder to maintain my balance when I am spinning, and I think this is apparent in the footage. I like that the footage references a certain type of struggle, but does so with a sense of lightheartedness.

I am now going to source some more matt black material and cover the wall and floor in this. I will then record me spinning and will wear the orange cone and outfit.
Posted by Helen Shaddock artist at 03:05

A very informative article! May I just suggest a couple of things: if you have problems with your green screen haloing, that might have to do with resolution (and ultimately the clarity of the outline separating your body from the background). It might help to shoot the stills at a higher resolution than the final video, key them at the higher resolution, and only then downsize them to video resolution.

Also, whenever green-screening, you will have to be very careful to avoid green light spilling from the background onto your subject.

In the meantime, if you're still struggling to get the background to go black, try putting black boards between the lights and the background - and if that doesn't help enough, I would recommend lights with honeycomb filters, as these avoid unwanted light spillage.