The Gallery of Wonder - on tour

This afternoon I was part of the crew helping Irene Brown to destall The Gallery of Wonder which had been erected in the grounds of Newcastle University prior to it going on tour across Northumbria. 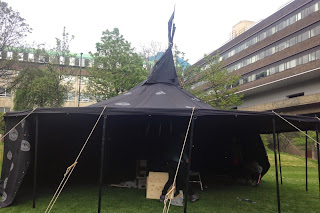 The Gallery Of Wonder will travel across Northumbria, appearing at Northumberland county and border shepherd shows in a distinctive customised dark grey wagon, covered in symbols of curiosity and mysticism presenting tantalising clues to its unique contents. 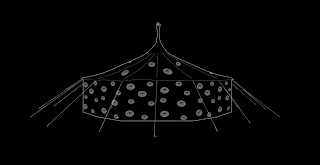 At each venue the crew will erect the gallery, a big black circular tent decorated with countless piercing eyes, some set with small lenses providing a distorted peep into the shadowy interior. Outside, a barker (performance artist Dennis Jobling) entices the public to purchase a ‘magic ticket’ to gain entrance to the mysterious exhibit.

Within is an exhibition of new works of art created by seven nationally and internationally known artists who have responded to the idea of wonder, captivating an audience and holding them spellbound by what they see.

How exactly do they do this? It must be seen to be believed. What we can say is that fifteen-foot snakes, enchanted flowers and vindictive fairies are part of this extraordinary spectacle.

The tented gallery makes specific reference to the history of travelling booths and side shows at fairs, when items of curiosity such as waxworks of famous people, coronation tableaux and strange misshapen creatures were presented, juxtaposing the exotic and the amazing, the scientific and the fantastic and firing the imaginations of visitors.

The Gallery Of Wonder On Tour has been developed by Arts&Heritage and is project led and designed by Irene Brown.

This is an exceptional project that sees a national arts and heritage agency taking artists’ work to a very different place - muddy fields and isolated rural village fairs. 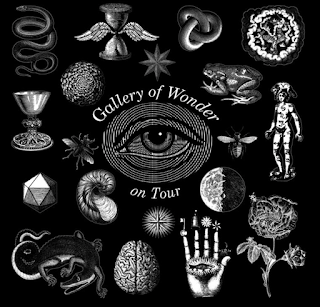 “He who can no longer pause to wonder and stand in rapt awe, is as good as dead; his eyes are closed”.

Can you pause to wonder?