It has been a really intense but exciting and fun day installing the collaborative installation 'A Third Exhibit' in the Hatton Gallery. All was resting on today - bringing the various elements together into the space and turning them into a cohesive whole. 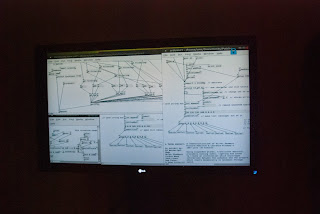 As Sean dealt with all the programming operations of the sensors for the lights and sound, Corbin adapted the footage that we were recording in the space during the install into something unrecognisable and extremely atmospheric and mesmerising.

Ed was busy attaching all the lights to the columns, inflating the balloons and positioning the speakers.

Rob and Jack made little sandbags which acted as weights to prevent the balloons from floating up to the ceiling. These were attached to the corners at the bottom of the lengths of fabric by eyelets that had been punched into the fabric. 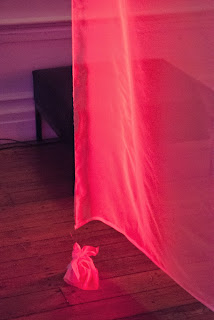 The balloons were inflated with helium and between us we managed to create suspended planes from the fabric.

It all came together in the last hour when we collectively decided on the volume levels, the fine tuning of the lights and the positioning of the planes. 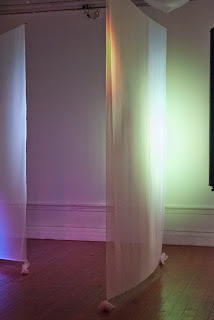 This entire process, and throughout the Late Night event, a webcam filmed what we were up to and live streamed to view online.

Posted by Helen Shaddock artist at 02:58