The NewBridge Writers Group - Session 2 - Turning on the tap

The focus of Week 2 was to get people started, and comfortable with starting. Alex likens his writing process to that of turning on a tap. The longer you leave it, the harder it is to turn the tap on, to get creativity flowing. The more often you do it, the looser the tap is, the more the creativity flows easily.

Run the string out between two points and give everyone three pegs and they choose three postcards. 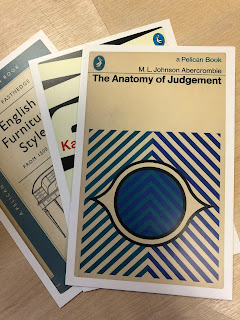 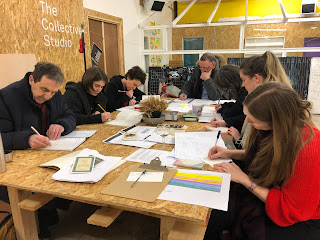 Then when everyone has done this, they hang the stories up on the line, with one end being far history and the other being present day. 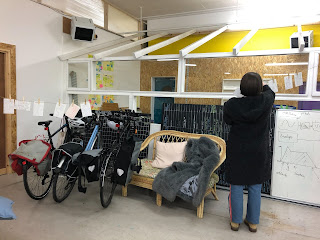 Then we all stand and each person chooses one of the stories to share. They go over, and take one down, and read it out and share. 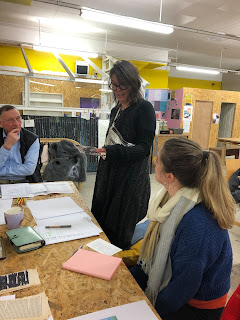 write the ‘what happened next’ part of the story using the story on the card as the prompt.

Blackout writing is when a page of text — usually an article from a newspaper — is completely blacked out (colored over with permanent marker so that it is no longer visible) except for a select few words. When only these words are visible, a brand new story is created from the existing text. 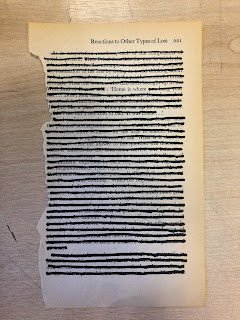 Everyone takes a torn out page provided and a sharpie/black marker, and uses the marker to ‘reveal’ a sentence from the page, blacking out all the other words, so you have just the sentence left. This sentence is the starting point of a story—it might be a completely new story, or it might be part of an existing piece the person is working on.

Write the next sentence 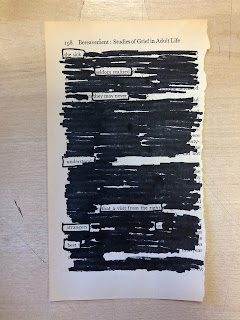 Once you find your page, then choose a number between 1–5

Find the sentence that corresponds with that number (ie. number 2 would be the second sentence).

Use that sentence as the first sentence of your prompt and write for ten minutes (or the time frame of your choosing).

Write down the title/topic/name of that article and a little information that will remind you what it is e.g. Nick Santora, writer and producer 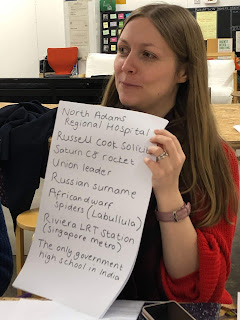 Repeat until you have no less than 6 articles

Write for ten minutes (or the time frame of your choosing), attempting to incorporate as many of the article names into your text

We discussed examples of when authors have 'broken the rules' of language as we know it.

"Ducks, Newburyport is 1,020 pages long,
95% of the novel is made up of just eight near-endless sentences, without paragraph breaks, some of them spooling over more than 100 pages,
most of the novel is a list of statements, separated by commas, that begin with the phrase “the fact that”,
these statements are also punctuated by the seemingly random emanations of the narrator’s mind,
some of these are songs, earworms"

Chapter numbers are prime numbers because that is what the narrator likes
Diagrams, maps, charts, graphs, drawings are used throughout
Important sentences are in bold text
Sentences often begin with the word "And"

We circulated and discussed Natalie Goldberg's 'earning the right' concept, and shared Alex's 'Pod' short story as an example of focusing on concrete nouns and verbs, rather than complicated adverbs or adjectives, to do the ‘heavy lifting’ of a story.

"There is a sentence ‘Coruscated leviathans, suspended infinity’ which is an abstract image which I feel I ‘earned the right’ to use because of the concrete imagery used leading up to it"

We circulated Amy Mackelden's "Conversation four" and discussed how we feel about taking or "stealing" from real life conversations and scenarios, memories

Optional Additional Writing Exercise: Think of a conversation or a line of a conversation you can write about, and take that line, and build the beginning of a narrative story (non dialogue) around it. E.g. write about it from a narrator’s point of view.
Posted by Helen Shaddock artist at 14:38