"On display at Newcastle University’s Hatton Gallery (18 January – 9 May 2020) Aldworth’s principal work, Out of the Blue, represents the experiences of people living with epilepsy through art and the cutting-edge brain implants being developed by the CANDO project to try and control focal epilepsy." 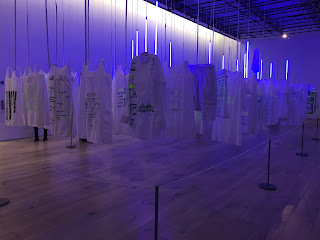 Over fifty people living with epilepsy contributed their highly personal experiences to Out of the Blue. They came from all ages, diverse backgrounds, and from as far afield as Kenya, the USA and, of course, the UK. For many, it is the first time they have publicly shared their feelings, either as a sufferer, or carer of someone living with epilepsy.

This was followed by a successful national appeal, which found 100 experienced embroiderers and needlework specialists who volunteered to assist Aldworth sewing the testimonies of people living with epilepsy onto 100 items of Victorian underwear using UV threads; to represent the hidden nature of epilepsy, now made public through the embroidered words. 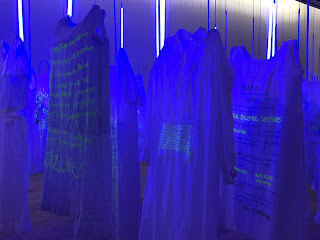 Inside the space, the garments have been attached to pulleys and motors, which shake in the manner of an epileptic seizure, while UV and blue lights shine onto the work to illuminate the wording.

“The idea is to present the hidden experience of epilepsy on garments usually obscured beneath our clothes,” explains Susan. “The installation brings the experience into the public domain. The threads fluoresce under UV light, effectively mirroring and representing the optogenetics employed in CANDO’s remarkable work.” 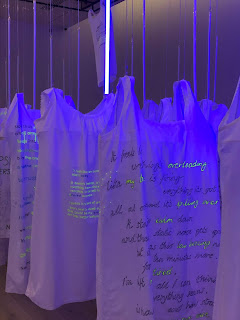 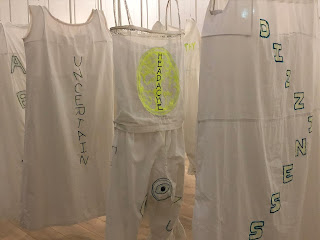 “The entire piece is programmed to move in the neural patterns and pathways associated with epilepsy. The movement will become increasingly synchronised and, once fully aligned, they will collapse onto the floor. Slowly, the clothes will start to move again, and restore themselves into their original configuration,” Aldworth adds.

The significance of the 100 embroiderers and 100 items of clothing is also poignant, as epilepsy affects 1 in 100 people and uncontrolled seizures can have devastating effects on people’s lives. Out of the Blue seeks to highlight the experience of living with epilepsy and create a discourse about the ethical and personal implications of the CANDO implants."

Despite there being a slight technical problem with the mechanics of the pulleys, meaning that they were not moving at the time I saw the exhibition, I found this installation visually stimulating and thought provoking.

The garments had a ghostly presence in the space, unified by their lack of pattern or colour. This placed emphasis on the words. The careful and intricate labour that went into producing the work is suggestive of an onerous time-consuming task, one that is challenging and overwhelming in itself, rather like how I imagine the experience of living with epilepsy is. Each embroiderer interpreted the words (written by someone living with epilepsy) in their own way and created unique designs for each and every garment. The UV light literally illuminates our awareness of the condition and references the CANDO research in a non-overly scientific manner. I really respect the way that Aldworth has respectfully used the experiences and personal responses of others to form a very powerful installation. 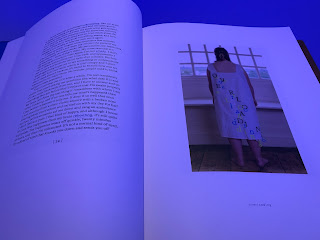 The limited edition Artist’s book containing the full text of the testimonies alongside 64 photographs by Peter Abrahams of the embroidered garments, is a beautiful document providing a deeper level of understanding about the experience of epilepsy. Similarly, the embroiderers' notes that can be read in the gallery also offers us an insight into the experience of another group of individuals who are fundamental to the project. It is clear from these accounts that being involved in this artwork has had a profound effect on them.

Posted by Helen Shaddock artist at 16:03