Hans Grüsel's Krankenkabinet perform in a very theatrical manner. The three performers were transformed into Hansel and Grettle-like characters wearing huge fabric headgear that covered their entire face apart from a couple of holes for their eyes. Sporting a pretty pinafore dress, the violinist danced wildly around the stage in an energetic and enthusiastic manner so much so that she continuously had to readjust her headgear as it became loose. The seemingly innocent appearance was in contrast to their chaotic, wild and aggressive noise which left me feeling disquieted and in need of some fresh air! 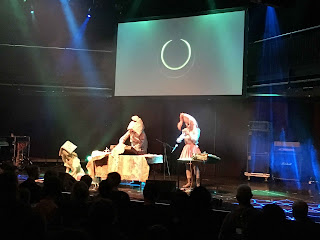 "Hans Grüsel's Krankenkabinet is an ever-changing woodgrain diorama of dark forest characters. Using electronics, field recordings, acoustic instruments, props, costumes, and scenery, the ensemble explores the lost Teutonic rites of the past, while stumbling into the failure of the future."

"What this band are like really can’t be done justice with a few pithy sentences. They’re genuinely like nothing you’ve heard before – and bizarre to the point of actually being quite disturbing: dwelling too long on their singular version Tea For Two can feel like you’re opening the door to a rapidly descending psychological staircase from which you may never escape. Heavy Vibes magazine had a good stab at defining the Krankenkabinet experience though – “Imagine yourself in a pre-WW1 German village where wooden children with mekanikal insides have taken over as they conspire to concoct the most demented Moog-driven kilng klang you’ve ever heard in your livenlife”. Lovers of Caroliner and last year’s sanity-tweakers Rubber O Cement will hear psychic parallels and there are rumours of shared personnel, clandestine though facts re Hans’ membership are. Whoever they are and whatever the hell they are doing though, this is going to be some kind of spectacle."
http://tuskfestival.com/artists/hans-grusels-krankenkabinet/
Posted by Helen Shaddock artist at 16:09