To mark the opening of the exhibition, Sean Scully: 1970, Newcastle University and Tyne & Wear Archives & Museums hosted an artist talk with Sean Scully.

As ever, Professor Chris Jones offered his considered thoughts, on, in this instance, the work of Sean Scully. He spoke about how Scully was able to evidence the humanising potential of painting. He also mentioned a couple of anecdotes that explained Scully's significance to Newcastle, in particular to the fight to keep the Hatton Gallery at Newcastle University. It therefore seems fitting that Scully's exhibition is one of the first after the major renovation. 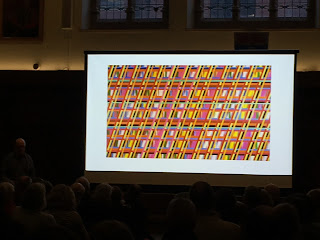 Scully spoke simply, honestly, with humour and in a way that allowed his strong character to shine through. "Born in Dublin, Ireland in 1945, Scully moved to Newcastle in 1968 to study Fine Art at Newcastle University. During this time, he began to develop his iconic style of technically flawless paintings, consisting of a complicated grid system of intersecting bands and lines." He was keen to refer back to times as a child and memories of activities that had an impact on his future artwork. For instance, when he was a youngster, he used to darn socks and engaged in more feminine activities such as sewing and weaving. This influence is evidenced in his weaving sculptures and grid patterns. 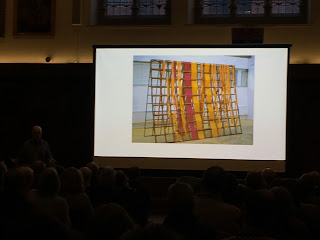 Scully spent time in Morocco where he was inspired by the visuals of Islam. "The world of Islam is a world of rhythm as opposed to image". It was after his trip to Morocco that he began painting in lines. He created grid paintings that acted as portraits of bridges in Newcastle showing layers of simultaneous activity, layers of order. He liked to fight between formalism and informalism, and was attempting to break order with order. 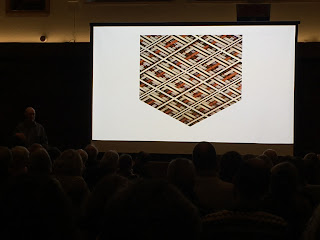 Scully believes that there is nothing pure about his art, and embraces impurity. He regards himself as a fusionist; an integrationist. 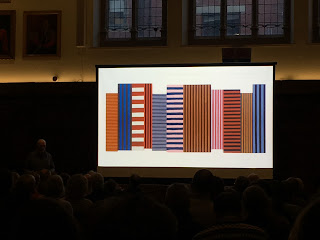 Later, when he moved to America, his paintings became stripped down to the essentials - lines and stripes. Working on aluminium sheets, he slices paintings, making them seem unstable. 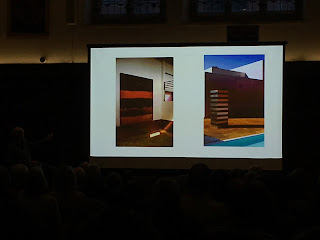 Scully also spoke about his sculptures, but I don't think that these are as powerful as his paintings. Perhaps that is because he does not make them, but has a team of people who make them for him. I was surprised to hear that they even go against his colour choices, and this makes me question is role as an artist. 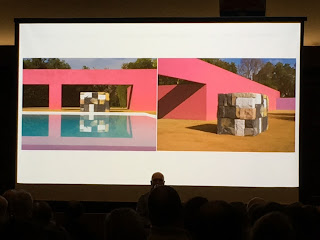 It was a fascinating insight into the development of a significant body of work over a substantial period of time, and his entertaining delivery of the talk made it all the more enjoyable.
Posted by Helen Shaddock artist at 13:36