I am a regular BBC Radio 6 Music listener, and one of my favourite DJs is Mary Anne Hobbs, who hosts a morning programme every Saturday and Sunday as well as the Thursday edition of 6 Music Recommends. It was a few months ago I that first heard Mary Anne Hobbs play the music of the American saxophonist and multireedist, Colin Stetson. 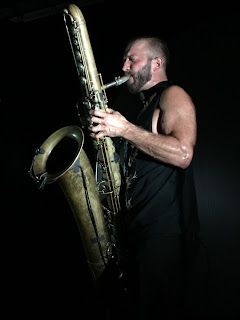 "Over the years Stetson has worked extensively live and in studio with a wide range of bands and musicians including Tom Waits, Arcade Fire, Bon Iver, TV On The Radio, Feist, Laurie Anderson, Lou Reed, Bill Laswell, Evan Parker, The Chemical Brothers, Animal Collective, Hamid Drake, LCD Soundsystem, The National, Angelique Kidjo, Fink, and David Gilmore. Meanwhile he has developed an utterly unique voice as a soloist, principally on saxophones and clarinets, his intense technical prowess matched by his exhilarating and emotionally gripping skills as a songwriter.

Stetson’ s astounding physical engagement with his instruments (chiefly bass and alto saxophones) produces emotionally rich and polyphonic compositions that transcend expectations of what solo horn playing can sound like. 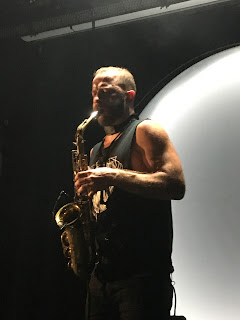 Stetson is equally at home in the avant jazz tradition of players who have pushed the boundaries of the instrument through circular breathing, embouchure, etc. (i.e. Evan Parker, Mats Gustafsson) and at the nexus of noise/drone/minimalist music that encompasses genres like dark metal, post-rock and contemporary electronics (i.e. Tim Hecker, Ben Frost – both of whom have mixed or remixed Stetson recordings)." 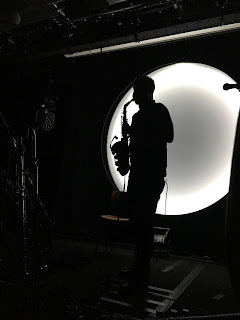 It was like nothing I have ever experienced before. The sounds produced felt like they were coming from an unearthly being, and Stetson has a way of making it seem like the instruments are part of his own anatomy. Using specialist circular breathing, he is able to sustain notes for a long period of time. I was really close to the front of the stage and was entranced by the strength it took just to hold the instruments, let alone play them in such an intense and prolonged fashion. 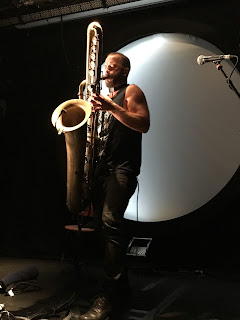 I would urge anyone who is on board for a totally unique sonic experience to check out Colin Stetson play live - it is something very special. But choose who you go with carefully - it is not easy listening and will challenge the ears!

To listen to highlights from Dark Matter at Manchester International Festival, including live tracks from Kojey Radical, Holly Herndon, Colin Stetson, Paleman and The Haxan Cloak, click the link below.