I was invited to participate in Climate Symphony, an event devised by Disobedient in collaboration with Jamie Perera. It was co-produced by Forma Arts and Disobedient, and supported by Arts Council England and Sculpt the Future Foundation. The event was held at Culture Lab, Newcastle University. Climate Symphony was a live music performance that turned data into a four part symphony to tell the story of what climate change means for humans and their environment through sound.

Some questions we thought about included

Can we use sound as a narrative and reporting tool?

Can we engage and inspire and maintain factual rigour?

The lab brought together scientists, artists, journalists and members of the public to interrogate some of the ideas behind the project and as part of a workshop/lab, we created some initial works to communicate some of the data to a new and wider audience.

The lab was intended as a research and development vehicle to answer key practical and artistic questions around the process by which we can transform data into a narrative symphony. 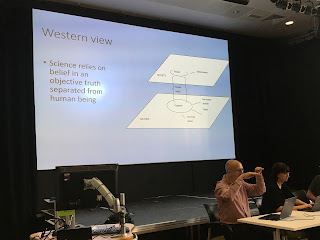 Jim Lloyd gave an introduction to his work as a scientist and artist, and discussed some of the challenges he faces with science that led him to art. Jez Riley French described his approach to field recording and shared some examples of his work.

What is the Sound of a Dying Planet? We split into two groups and each group selected a set of climate data and turned that into sound. 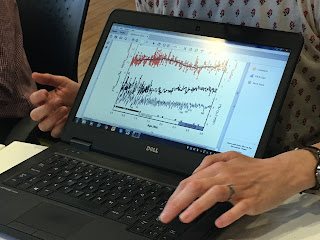 This is the data set that we chose (kindly provided by Erin in our group). 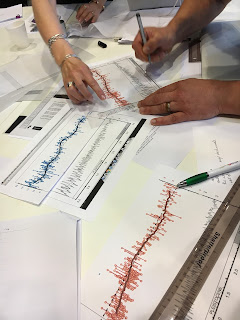 We found the averages of points along the timeline and plotted this data into the computer. We used the trends to alter the recordings that Jez from our group had provided. 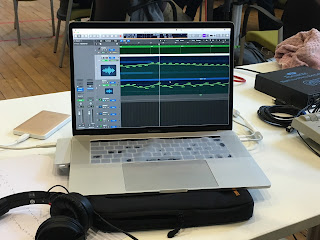 Each group explained the decisions made throughout the process of making the work, discussed the challenges faced, what worked, and what didn’t work. This led to a broader debate about role of sonification in communicating narratives of climate change.


Here is the presentation about the work that I was involved with making.


In the evening we were treated to two performances, one by Kate Carr and the next by Jez Riley French.

It was a really interesting and stimulating day, working with such a range of experts in their field and sharing lots of ideas and raising lots of questions. Thank you to Forma Arts and Disobedient for making it happen and for inviting me to be part of it.
Posted by Helen Shaddock artist at 11:25