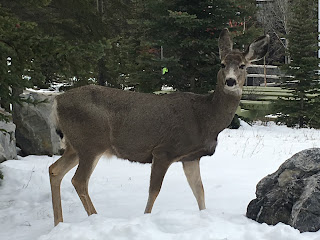 This morning I was greeted by a deer as I walked from the accommodation to my studio. How I will miss moments like this when I return to Newcastle!

I spent the majority of the day editing the sound files that I had recorded yesterday and practicing my performance for Saturday.

In the afternoon I attended Jim's talk on the geology of Banff. Most of the mountains in Banff are metamorphic rocks (Sedimentary rocks that have been heated or compressed). Limestone is most commonly found in Banff. There are parts of the mountains that are composed of clastic rock. Clastic rocks are composed of fragments, or clasts, of pre-existing minerals and rock. A clast is a fragment of geological detritus, chunks and smaller grains of rock broken off other rocks by physical weathering. One way of distinguishing the difference between limestone and clastic rock is by looking at the snow on the rocks - clastic sediments gather snow more than limestone. 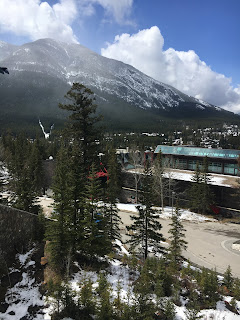 The other day at lunch I got talking to a couple of film makers who are on a short residency here. 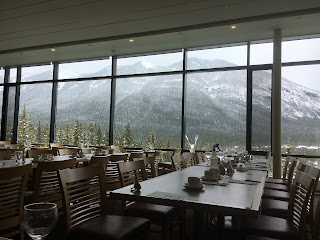 Tonight I met up with Rick to discuss the work that he and I are currently doing, and our links with mental health organisations. Rick is working on a project investigating the links between creativity and mental health difficulties. He is going to be interviewing 'mad artists' and showcasing the work that they make. The term 'mad artist' is not one that I am familiar with, and I was a little embarrassed to ask Rick to explain what he meant by it. He handed me a scrap of paper from his jacket pocket.

There was this short explanation of the term, and Rick was proud to inform me that the definition had been written by the Canada Council.

"Mad is framed as a social and political identity by people who have been labelled as mentally ill or as having mental health issues. Rather than focusing on awareness and coping with stigma, Mad Pride focuses on expressing the unique ways people experience the world in terms of making meaning, developing communities, and creating culture. Mad arts is the artistic exploration of Mad Pride focusing on mad histories and identities."

It is really encouraging to know that the Canadian Council have such a good understanding of the situation and are keen to support Mad Pride.
Posted by Helen Shaddock artist at 15:28