Motsonian // Becky Peach – Life in a Northern Town at The NewBridge Project:Gateshead

Today I am invigilating at The NewBridge Project: Gateshead. It is the final chance to see the first of three Life in a Northern Town exhibitions all of which feature work by emerging and early-career artists living and working in the North of England. It has been programmed in partnership with Assembly House (Leeds), Islington Mill (Manchester), Caustic Coastal (Manchester), Bloc Projects (Sheffield) and The Royal Standard (Liverpool). 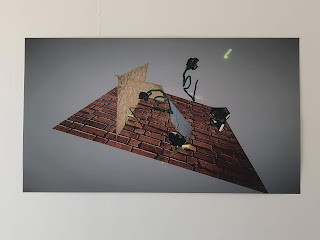 For the first exhibition of Life in a Northern Town, Motsonian and Becky Peach use sculptural installation to subvert and challenge peoples perceptions of, and interactions with space. Motsonian’s work explores the post industrial landscape of the North East, and the boundary between the physical and virtual worlds, and Peach invites audiences to reinterpret the space around them through wearable sculptures. 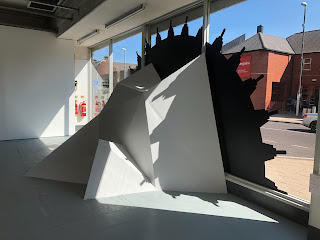 Motsonian’s Conical Earth explores the culture surrounding the Kiviõli hillclimb as a compelling metaphor for the transformation of the North East of England, where she now lives and works. The Kiviõli hillclimb is a motocross spectacle that takes place in the artist’s home country of Estonia on top of man-made hills created with the ash from oil shale mining which took place from the 1920s until the ‘90s. In the annual event, competitors ride modified motorcycles in an attempt to be the fastest to reach the summit of a steep incline. 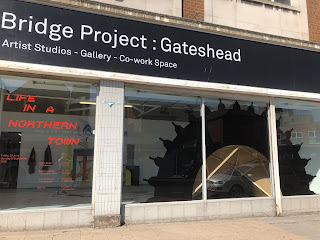 In this new work Motsonian suggests the Kiviõli hillclimb as a way of articulating a comparable identification with the North East of England: from historical traces of landscape and industry to the transformation of Newcastle into a leisure city and Gateshead into a cultural hub. As a symbol of the leftovers of industry reborn as spectacle and leisure, the work encourages questions at the heart of post-industrial northern identity and utility. 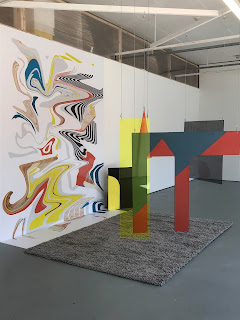 In Moving in (un)familiar places, Becky Peach draws from aspects of child’s play to create intimate sensory experiences, that re-evaluate the familiar, and provoke dissonance between space and action. Taking inspiration from recent visits to sensory rooms, Peach invites audiences to explore their spatial awareness through tactile interactions with shapes and textures that relate to the local surroundings.

As an advocate of arts for health, she is interested in how engaging in creative practice can enhance cognitive ability and further personal and collective consciousness. Curious to what point this is revealed and how much experience is shared.

Motsonian is the username for Monica Maria Rohtmaa (b. 1995. Viljandi, Estonia), an artist based in Gateshead, UK. Motsonian’s practice combines contemporary technology with sculptural installation by using virtual reality, drone footage and concepts from video games to create installations about the intersection of the physical and virtual worlds. Recent work uses projected video onto physical structures, in reference to what’s known in 3D digital environments as texture mapping, along with the visual symbol of knitting, a tradition drawn from her Estonian heritage, as a metaphor for a video game aim system or player’s view.

Motsonian has recently exhibited with Goldtapped (Newcastle), Baltic 39 (Newcastle), Northern Charter (Newcastle) and Exchange Rates (New York). In 2017 she was shortlisted for the The Woon Foundation Painting and Sculpture Prize. Her writing on video game space in contemporary art recently appeared in IsThisIt?Magazine.

Becky Peach is an artist, facilitator and current director of The Royal Standard.She is the print assistant and engagement assistant at The Bluecoat. Concerned with hierarchies, codes and values that govern behavior, Becky explores community alongside autonomy through engaging in processes that are harmonious among the fine arts, design and craft disciplines.