The Drone Ensemble in Infinity Pitch, an exhibition by Pester & Rossi at The BALTIC

The Drone Ensemble were invited by the collaborative duo Pester & Rossi to host an experimental sound workshop for young gallery visitors during the Infinity Pitch exhibition at The BALTIC. 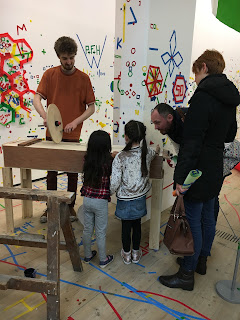 Pester & Rossi are asking visitors to make, break and re-make the rules of play. BALTIC’s largest gallery space has up to eight live action stations with activities where you can watch, listen, explore, improvise and play along with a number of enormous colourful inflatables. 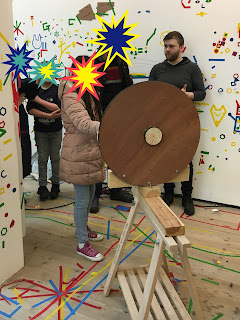 We had planned a simple workshop structure that involved making megaphones for the children to use to mimic the sounds of the instruments. To make the megaphones we had prepared templates that could be used to trace the outline that was to be cut out of coloured card. Pester & Rossi have supplied rolls of coloured electrical tape for gallery visitors to use to transform the walls and floor of the gallery. This tape was also used to form and decorate the megaphones. The Drone Ensemble would perform a number of times throughout the duration of the workshop, following a score projected onto the walls and getting the children to participate at specific times. However, once we entered the space we soon realised that we would need to reassess our plans due to the existing noise levels, the nature of the space and the sheer number of children who desperately wanted to have a go at playing the instruments. 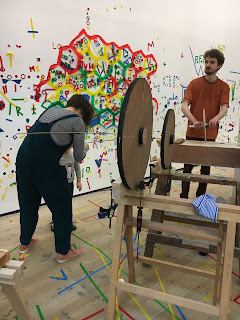 After setting up the instruments and observing how the space was being used, we had a group conflab and prepared our plan of action. Each of us was responsible for one type of instrument, and we were to demonstrate how to play the instrument. We encouraged the children (and adults) to try playing the instruments, and guided them as they did so. 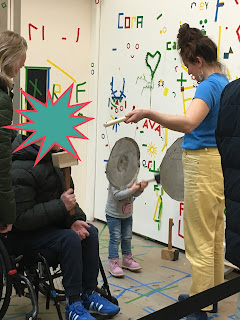 I was very impressed by the children's abilities to learn how to play a new instrument, particularly the friction drums. 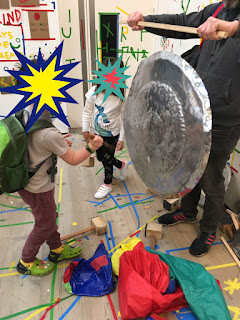 The gongs were extremely popular, and we were able to involve lots of the kids playing the gongs at once as we performed a number of gong parades around the gallery. Pester & Rossi have made a selection of costumes for visitors to wear, and so we encouraged the children to dress up in these. Armed with a gong in one hand, a beater in the other, and dressed in an array of brightly coloured red, green, yellow and blue outfits, we paraded around the gallery in single file making a rather colossal sound. 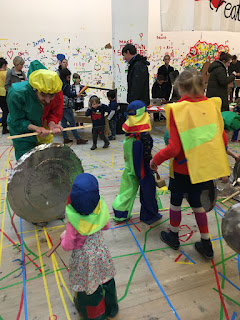 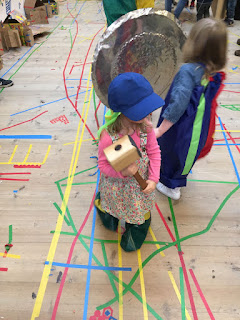 The children enjoyed making the megaphones, and this activity was easy to manage as the instructions were very simple and did not require many materials or guidance. This meant that we could concentrate on playing the instruments with the children. 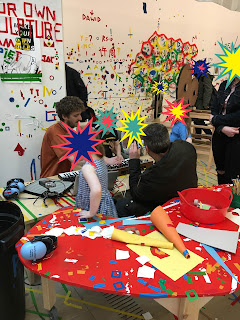 The workshop was a big success and Pester & Rossi were pleased with our contribution and response to their exhibition. We were exhausted afterwards, but would certainly consider doing more workshops in the future.

Posted by Helen Shaddock artist at 15:58