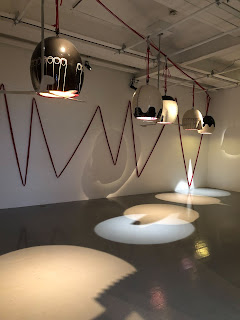 The Fruitmarket Gallery is one of my favourite galleries. I rarely leave disappointed, whether that be due to the reliably top class exhibitions or the excellent range of art and culture publications available in the shop. Located right next to Edinburgh Waverley train station, it is often my first point of call on any trip up to the Scottish capital. My recent visit was no exception. 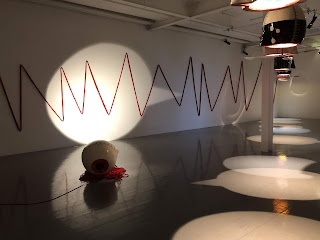 I had no prior knowledge of the work of Emma Hart, and this made for an excellent treat. I was immediately attracted visually to the sculptural installation that greeted me in the downstairs gallery. 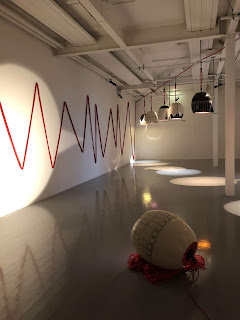 "The exhibition presents two bodies of work that represent the most recent developments in her artistic practice: Mamma Mia! (2017), a major installation made following a residency in Italy awarded as part of the Max Mara Art Prize for Women that Hart won in 2016; and a group of new sculptures collectively titled BANGER (2018) made since Mamma Mia! and in response both to it and to the space of The Fruitmarket Gallery. 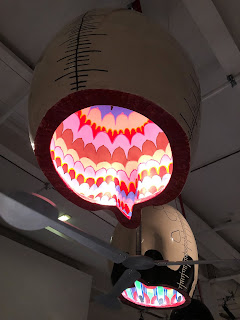 Mamma Mia! (2017), consists of ten large ceramic objects which hang from the ceiling, while an eleventh lies sidelong on the floor. The objects simultaneously resemble heads, upturned measuring jugs and lamps. They are glossy and monochrome, and project large speech bubbles onto the floor, some of them periodically sliced through by the shadows of ceiling fans made of oversized cutlery. As you move around and under the forms you become aware that the interior of each is a riot of intensely coloured, highly inventive pattern. The patterns used, ranging from the violent to the humorous, suggest the cyclical nature of anxieties and addictions, as well as the habitual repetitions of everyday life. 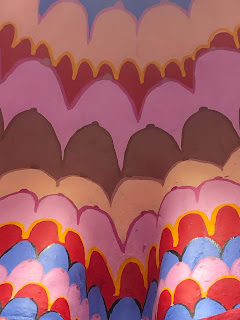 Upstairs in BANGER, viewers are faced with Just Because You’re Paranoid Doesn’t Mean They Aren’t After You. Headlights in a rear-view mirror, the work has you projecting forward and looking back, thinking about what’s behind you before you turn left into the rest of the space. And when you do turn, you find yourself face to face with the first in a series of four double-sided sculptures, car windscreens that stand, like road signs, around the gallery. On one side – the outside – you see into the inside of a car. On the other – the inside – you look out to the outside. The sculptures are made from handmade ceramic tiles, closely tessellated in such a way that the same shapes make different images on each side. 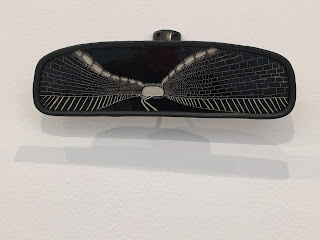 The four major sculptures, Green Light, Give Way, Wipe Out and X, are joined by others that direct and affect how you navigate the space – peering at and under the car bonnet of Fix Up; standing square onto the steering wheels of Race You to the Bottom; moving past Gatecrasher, both a safety barrier and a drawing of a car that seems to have crashed into the gallery wall; and tracking the movement of the woman of Wind Down as she winds herself face first down into the gutter and receives a splash in the face. 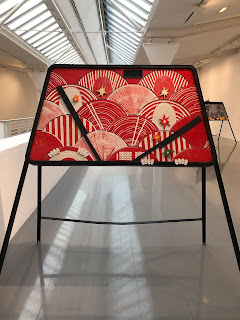 Throughout the gallery, visual and verbal puns bring things together and apart, both simplifying and complicating your looking as you ’get’ – or maybe struggle to get – the idea. Multiple ways of looking at each sculpture emerge the more you look. This shift in viewpoints plays out in the dual meaning of words like viewpoint and perspective, which are both about actual processes of looking and also about one’s worldview." 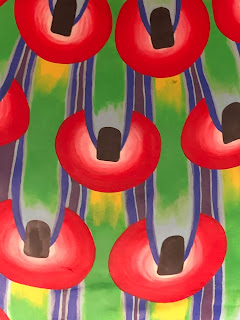 I was fascinated to discover that Mamma Mia! is the result of a residency in Italy in which she had "access to lessons about the Milan Systems Approach, a systemic and constructivist method of family therapy at the Scuola Mara Selvini Palazzoli which involves physical re-enactments and the study of repeated actions. The body of work is the culmination of an investigation into pattern, from visual patterns to patterns of psychological behaviour. The work also looks at the design and rupture of pattern and the ruminations in between."