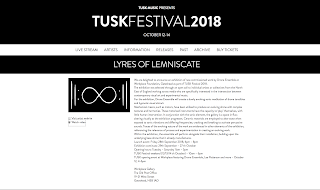 We are delighted to announce an exhibition of new commissioned work by Drone Ensemble at Workplace Foundation, Gateshead as part of TUSK Festival 2018. The exhibition was selected through an open call to individual artists or collectives from the North East of England working across media who are specifically interested in the intersection between contemporary visual art and experimental music.

For the exhibition, Drone Ensemble will create a slowly evolving sonic meditation of drone tonalities and hypnotic visual stimuli.

Mechanical means, such as motors, have been utilised to produce an evolving drone with complex textures and harmonies. These motorised instruments have the capacity to ‘play’ themselves, with little human intervention. In conjunction with the sonic element, the gallery is a space in flux; altering visually as the exhibition progresses. Ceramic materials are employed to alter state when exposed to sonic vibrations and differing frequencies; cracking and breaking to activate percussive sounds. Traces of the evolving nature of the work are evidenced in other elements of the exhibition, referencing the relevance of process and experimentation in creating an evolving work.

Within the exhibition, the ensemble will perform alongside their installation; building upon the underlying base drone that it already manufactures.

The opportunity to work with TUSK and Workplace on this joint commission has encouraged us to shift into new territory; placing further emphasis on the aesthetic of what we produce, as well as the sonic elements. Most Drone Ensemble members have fine art backgrounds so this exhibition has given us the opportunity to apply our knowledge, skills to explore the place where the visual and sonic may intersect. Drone Ensemble 2018

This commission to create new work was initiated by Workplace Foundation and Tusk Festival supported by the Digital Cultures Research Group in CultureLab at Newcastle University.

Drone Ensemble is an experimental sound group that uses hand-built instruments in extended improvised performances which have enthuses on drone tonalities. The instruments draw influence from musical traditions from around the world but often end up being unique in their playability, construction and sound. Drone Ensemble has a fluid membership and although there is a group of core members we bring new members in without audition and promote an attitude of open membership and a belief that exciting and cutting edge sound art is not an exclusive activity but rather is better enjoyed through a sense of community

TUSK Festival presents its 8th edition of the annual event this October 12-14. Since 2011, TUSK has presented artists from almost 30 countries and a wide range of stylistic approaches to adventurous music and related art forms. Our uniquely diverse approach to festival programming has created countless first-time appearances by artists in the region/UK and we have a special interest in artists working at the fringes of typical genre definitions. TUSK is also highly regarded for its film programme, exhibitions and the insights it offers into the work of often previously unknown artists. Full details of this year’s programme are available at our website.
Culture Lab and the Digital Cultures Research Group
Culture Lab is a hub for research in digital creative practice and film practice at Newcastle University. Culture Lab lets members engage in experimental and cross-disciplinary projects in creative digital arts. Members work in technologically rich and custom designed environments. The Digital Cultures Studio is a centre for creative digital practice. The research group includes artists, designers, musicians, and performers. Researchers' work in the Digital Cultures Studio is experimental and engaged with contemporary technology.

Rachel Lancaster is an artist and musician who lives and works in Newcastle upon Tyne, and is represented by Workplace Gallery. Lancaster’s practice focuses on the crossover and intersections between the languages of painting, cinema and music. She has taken part in numerous exhibitions, projects and performances. Alongside her visual art practice Lancaster is a musician and has been a member of numerous musical projects including Silver Fox, (with releases on Upset The Rhythm, London), formerly a member of Gravenhurst (Warp records) live band and A M Grave (with Stephen Bishop/Opal Tapes) alongside more recently performing solo material under her own name. She has previously worked on audio/visual collaborations with various artists including a commission with musician Wolfgang Voigt, (founder of Kompakt Records, Cologne, Germany) creating large-scale HD visuals for his live performance at Tusk Festival 2016.
Posted by Helen Shaddock artist at 20:05