Wolfgang Tillmans at The Common Guild 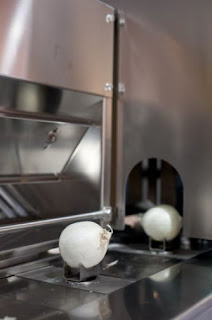 As the onion makes its way into the unknown, maybe to become an onion ring, or to be sliced, diced, or fried, I look out of the huge windows of the gallery at the rain pouring over Glasgow, before returning again to the array of images scarred over the gallery walls.

In true Tillman's style, the show has a mixture of large and small photos and a diverse range of imagery.

The initial images I saw downstairs were sculptural; as the photographic paper was folded the image was transformed into an object reminding me of Jim Lambie's folded metal pieces.

Tillman comments “I love the piece of paper itself, this lush, crisp thing. A piece of photographic paper has its own elegance, how it bows when you have it hanging in one hand or in two and manipulate it, expose it to light – I guess it is quite a gestural thing.”

Tillman's images can also be extremely painterly, as in the large image of the pink/beige/cream surface that faces the folded works.


Posted by Helen Shaddock artist at 19:01