My good friend Gary often sends me information about other artists, the most recent being Mindy Shapero who just had an exhibition at Marianne Boesky Gallery, New York. 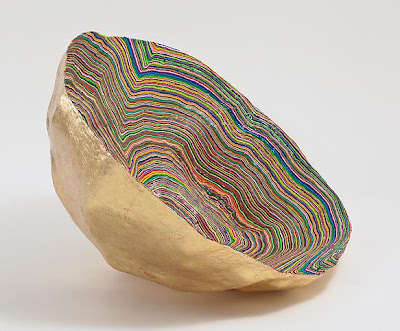 
Marianne Boesky Gallery is very pleased to announce Breaking Open The Head, its first solo exhibition of new work by Mindy Shapero. Featuring large sculptures, a grouping of smaller objects, and works on paper, the exhibition locates Shapero's labor-intensive process at an intersection where narrative and formalist impulses collide. In her practice, visual intensity often overrides the very forms it has been used to create, resulting in objects that dare to contradict their reasons for being. Accordingly, Shapero operates in a zone that can be read in relation both to art historical tradition and to outsider tendencies predicated on visionary experience.

The exhibition's title, borrowed from writer Daniel Pinchbeck's treatise on psychedelic shamanism, suggests the otherworldly qualities readily associated with Shapero's work. But it also refers more directly to the head-like forms that recur throughout the show. The head functions here as a primary symbolic representation of imaginative flux. When it is 'broken open,' it is revealed as a profoundly physical thing that has the paradoxical ability to transcend the physical plane –– by thinking, dreaming, and hallucinating.

This can be seen clearly in three new sculptures that treat the head as a state of becoming and/or dissolution. In one, a large shell-like form has been filled with small pieces of cut paper arranged into swirling rows; before cutting the paper, Shapero paints each sheet black so that hints of its original color can only be seen at the edges. While peering into the piece can feel like staring into a limitless void, upon further viewing it becomes apparent that its shape is in fact based on a giant face, and new questions about what it depicts begin to arise. Looking itself is treated as an ongoing process of transformation, a state of mind that allows interiority and exteriority to mix and become a single metaphysical continuum.

A second work features a similarly shell-like form with a luminous gold-leafed exterior, recalling a variety of ancient art historical antecedents. The interior, however, is filled with maze-like concentric rings of puffy paint in an array of colors. Though it has sculptural dimensionality, the paint flattens out the relief of its supporting surface and prevents it from being read as a head or face. If this is a representational artwork, its subject seems to be the interior of the imagination rather than an outwardly recognizable figurative form.

The third sculpture in the series completely inverts the relationships between form and formlessness proposed by the other two. Here, the exterior of the object is covered with barely translucent pieces of cut white paper that resemble feathers or fur. As they capture and reflect light, they obliterate the sculptural face that gives the piece distinctive form. Throughout these works, Shapero treats the absence and abundance of color as companion states in which the visual field is overwhelmed, and the viewer is forced to look beyond immediate physical reality into a space redolent of the unknown. 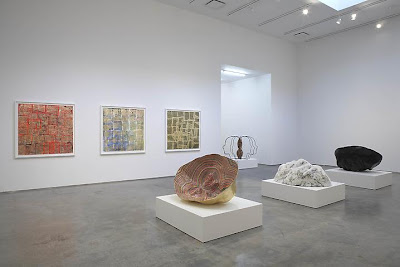 In another pair of sculptures that also make use of imagery based on heads, arrangements of bent metal rods introduce line, and therefore an element of drawing, to the work. One features a central form covered in colored paper; surrounding it are a series of stylized profiles formed from the metal rods. Gradually the central form reveals itself to be a continuation of the 'spinning' silhouettes, and the illusion of movement is juxtaposed with the teeming array of color that animates the work's visual anchor. The other piece reverses this arrangement, so that its striped, painted center recalls a spinning profile, while the rods that surround it continue the 'drawing' of the back of the head in space. Figuration, abstraction, flatness and volume switch places, and seem to illustrate the transaction between an object and the mental processes of the observer who perceives it.

The use of metal rod carries over into a group of smaller sculptures arranged together on a large pedestal installed in the gallery's front room. Reminiscent of arches, thresholds, and molecular structures, they take on performative characteristics when seen in combination, and create narrative associations that are indicative of Shapero's ability to use language as a generative tool. Because they recombine materials and techniques seen in the larger works, they also suggest that her practice draws in part from modernist notions of pure formalism. In the studio, the artist reconciles these two tendencies by developing fictional narratives as she works and allowing them to influence subsequent formal decisions.

Like Shapero's often elaborate titles, which allude to the evolution of such narratives, the works on paper on view reflect accretions of material and process. Stencil-like remnants of cut paper used to make sculptures are laid down as templates; after spray paint and leafing are applied, the negative spaces left in their wake demarcate dense layers of grids that confuse foreground and background. Though Shapero traces visual histories of materials being put to use, her relationship to the material world is not defined by sheer pragmatism. Rather, she perceives how tangible things are capable of transporting us beyond ordinary experience, so that the intangible is just within reach.

Mindy Shapero lives and works in Los Angeles. Her work has been featured in Like Color in Pictures, Aspen Art Museum, 2007; Diptych: Jockum Nordström and Mindy Shapero, Wexner Center for the Arts, Columbus, 2006;The Uncertainty of Objects and Ideas, Hirshhorn Museum and Sculpture Garden, Washington, 2006; Thing, New Sculpture from LA, Hammer Museum, Los Angeles, 2005. Her work was included in Vitamin 3D, published by Phaidon Press in 2009.


Marianne Boesky Gallery is located at 509 W 24th Street, between 10th and 11th avenues. Our hours are Tuesday to Saturday from 10am to 6pm. For further information or images, please contact Annie Rana at 212.680.9889 or annie@marianneboeskygallery.com.
Posted by Helen Shaddock artist at 01:35