The underground gallery has been transformed into a series of dimly lit spaces in which the eight different videos are housed. The atmosphere is solemn, and there is a sense of calmness. One cannot help adopting a slower pace. Although many of the video works have individual soundtracks, they are similar, meaning that they tend to blur into each other as one travels on a journey through the gallery.

"Considering universal themes of life, death, love and spirituality, Viola gives tangible visual form to abstract psychological and metaphysical experiences. He explores facets of the human condition and holds a stark and intimate mirror to our strength, fragility, and the impulses and inevitabilities that unite us. The eight works installed in the Underground Gallery continue Viola’s investigations of the unseeable, the unknowable, and the place between birth and death."

The exhibition features new and old work, and is dominated by works involving water.


"His new work, The Trial (2015), features a young woman and a young man, both bare-chested and on separate screens. Each are doused with a sudden and unexpected succession of different coloured liquids. Their ordeal intensifies then wanes as the cycle progresses and changes, from despair to fear to relief and then purification." 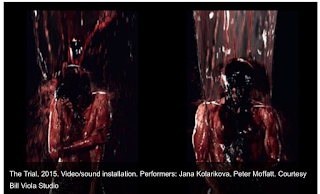 As with The Trial, other works have an element of duality, for example, The Innocents (2007) consists of one screen showing a figure moving away from the camera, and the other showing a figure moving towards the camera. As the figure walks into the cascade of water, the image turns from its grainy black and white state into high definition colour. Similarly, as the figure moves out of the water, the image quality reverses.

It is hard not to be impressed with the immensely clear and rich footage within all of the works. Man Searching for Immortality / Woman Searching for Eternity (2013) is a life-sized video diptych of the naked elderly man and woman projected onto two separate slabs of black granite that are leant against the wall of the gallery. This is video as sculpture. The detail is immaculate, with every wrinkle visible. Viola deals with the content with honesty, and in no way do the performers seem unnatural or staged.

It is rare that I visit an exhibition consisting purely of video installations, yet alone that I am captivated by each and every one of them enough to watch each for its full duration. Bill Viola's exhibition at Yorkshire Sculpture Park is the exception to the rule, and I enjoyed every minute of it.

Posted by Helen Shaddock artist at 12:13