Please excuse the quality of english and grammatical correctness in the following post. There is a reason... I am angry and outraged

A number of thoughts are spinning round my head:

If premises have to apply for a licence, then does this mean that the Glasgow City Council has the power to reject an application and therefore impose some kind of censorship

Surely the council realise that Glasgow has built up its reputation as an exciting city to be an artist in because of the number of pop-up exhibitions, DIY attitude, artist run galleries etc, and that by introducing such a licencing law, these things will no longer be able to happen - those in the arts have no money!

The new law has been cunningly announced only a few months prior to Glasgow International, the major visual art festival that sees many unused buildings and public sites used as contexts for exhibitions.

Is art entertainment?
According to Dictionary.com entertainment is "something affording pleasure, diversion, or amusement, especially a performance of some kind".

I have been to many an art exhibition where I have not come out smiling nor did I find it a pleasurable experience - was I entertained at these galleries?

I strongly believe that the artistic community needs to, (and will) stand up to the Council. 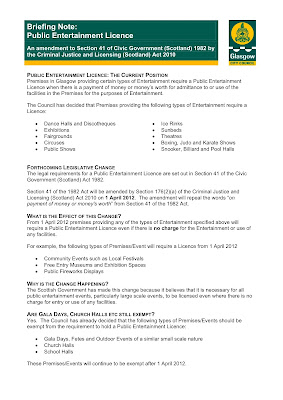 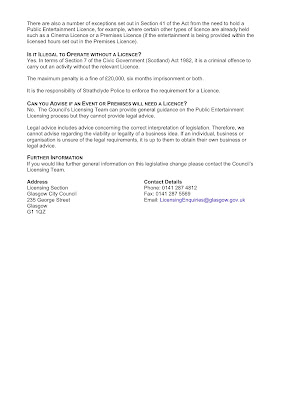 Posted by Helen Shaddock artist at 22:29

I have been surfing online more than three hours these days, but I by no means found any attention-grabbing article like yours. It is lovely value sufficient for me. In my view, if all website owners and bloggers made good content material as you did, the internet will probably be a lot more useful than ever before.
Glass Mosaic TILE for Bathroom, Kitchen, Backsplash, Wall - Piazza Series, Pebble Creek (10 sq.ft.)